Secret of efficient photosynthesis is decoded

by Mihai Andrei
in Biology, Chemistry
Reading Time: 2 mins read
A A
Share on FacebookShare on TwitterSubmit to Reddit

When you think about photosynthesis, the color green probably comes to mind – almost all plants are green, and they rely on photosynthesis, right? But purple bacteria have been around for a long time, and they are among the most efficient organisms at turning sunlight into usable chemical energy. Now, a key to their light-harvesting ability has been explained through a detailed structural analysis by scientists at MIT. 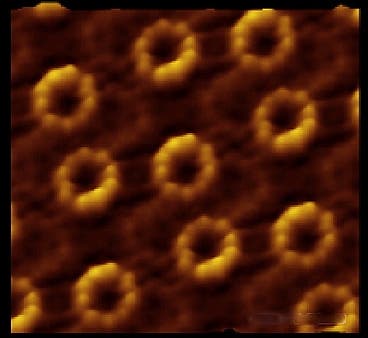 Researchers found a ring-shaped molecule with an unusual ninefold symmetry which is critical for the process; the circular symmetry accounts for its efficiency in converting sunlight, and for its mechanical durability and strength. The new study was conducted by professors of chemistry Jianshu Cao and the late Robert Silbey, postdoc Liam Cleary, and graduate students Hang Chen and Chern Chuang, and it has been published in the Proceedings of the National Academy of Sciences.

“The symmetry makes the energy transfer much more robust,” Cao says. “Most biological systems are quite soft and disordered. You would not expect a regular structure, almost a perfect structure,” as is found in this primitive microbe, he says.

These ring shaped molecules are arranged in a hexagonal pattern on the spherical photosynthetic membrane of purple bacteria, Cao says.

“With these symmetry numbers, the interactions between all pairs of the symmetric rings are optimized at the same time. … We believe that nature found the most robust structures in terms of energy transfer,” Cao says. Both eightfold and tenfold symmetries also work, though not as well: Only a lattice made up of ninefold symmetric complexes can tolerate an error in either direction. “You want consecutive numbers so it can tolerate such mistakes,” Cao says.

Stuart Rice, a professor of chemistry at the University of Chicago, says this work is “an inspired analysis and prediction for synthetic materials that is itself inspired by a biological process and system. I have not ever before seen the question of the relationship between energy-transfer efficiency and complexity of packing treated as in this paper. … This is a brilliant analysis that should find immediate acceptance.”

Interestingly enough, the study was funded by the military: National Science Foundation; the Defense Advanced Research Projects Agency; and the MIT Center for Excitonics, funded by the Department of Energy.