2012 is the ninth warmest year on record, yet global warming rate is decreasing

A recent report released by the UN and compiled by he Met Office and the University of East Anglia suggest the average temperature for 2012 will be about 14.45C, placing it in the 9th position of the hottest years list currently on record since 1850. Still, 2012 is cooler than the past decade’s average, registered as the hottest in history, lagging behind record readings of 2010 and 2005.

This, despite the effect of La Niña, a meteorological phenomenon which hit this years and is supposed to have a cooling influence on the Earth’s atmosphere. Make no mistake, things are still hot. Yes, warming has slowed down since 2000, in comparison to the rapid warming of the world since the 1970s, but it is still increasing! Last year, in 2011, greenhouse-gas emissions reached a new record high, showing that the developed world is still burning more and more. 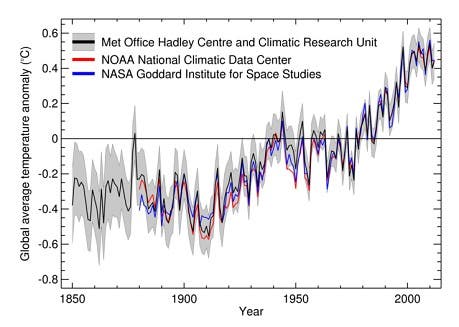 Environmentalists insist that this latest report should not be taken lightly, and indeed many key global warming subjects were tackled when 200 countries gather in Doha, Qatar for the latest round of United Nations climate change talks.

“Naturally occurring climate variability due to phenomena such as El Niño and La Niña impact on temperatures and precipitation on a seasonal to annual scale, but they do not alter the underlying long-term trend of rising temperatures due to climate change as a result of human activities,” said WMO Secretary-General Michel Jarraud.

“The extent of Arctic sea ice reached a new record low. The alarming rate of its melt this year highlighted the far-reaching changes taking place on Earth’s oceans and biosphere. Climate change is taking place before our eyes and will continue to do so as a result of the concentrations of greenhouse gases in the atmosphere, which have risen constantly and again reached new records,” he added.

A while ago ZME Science showcased seven charts that graphically explain how global warming progressed in the past century. We recommend you take a look, if you haven’t already.