Powerful hurricane wipes out tiny Hawaiian island off the map

Climate change claimed another island in the Pacific -- again.

A hurricane in the eastern Pacific obliterated an 11-acre island in the remote northwestern Hawaiian Islands. East Island, as it used to be called, was the second largest island in French Frigate Shoals ― an atoll some 550 miles northwest of Honolulu. The findings suggest that many more low-lying sand islands will disappear due to climate change which is known to intensify the frequency and severity of storms.

“I uttered a swear word. I had a ‘holy cow!’ moment, somewhat in disbelief that it had disappeared,” said Chip Fletcher, a professor of earth sciences at the University of Hawaii.

The remote gravel and sand island sat on top of a coral reef, which made it easy picking for a storm surge from the Cat-3 Hurricane Walaka. The hurricane caused havoc throughout the northwestern Hawaiian Islands this month.

East Island used to be home to the critically endangered Hawaiian monk seal, the threatened Hawaiian green sea turtle, and several species of seabirds. Researchers who were on the island studying these species were forced to evacuate — and they were smart to do so before the storm unleashed its full fury. Just take a look at this satellite before and after of East Island.

The drone video below shows a calm and inviting East Island up close and personal. 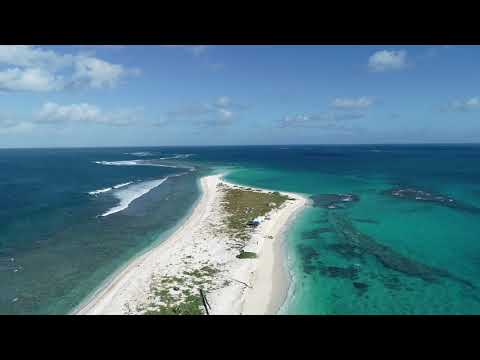 We don’t yet what the loss of East Island means for threatened species such as the monk seal or green sea turtle, but the impact is likely significant. Historically, East Island has been the nesting site for half of the Hawaiian green sea turtle population. Fortunately, all nesting females had left by the time Walaka hit. However, much of this year’s hatchlings have been lost.

“These small, sandy islets are going to really struggle to persist” in a warming world with rising seas, Charles Littnan, the director of the National Oceanic and Atmospheric Administration’s protected species division, told the Huffington Post. “This event is confronting us with what the future could look like.”

Rising sea levels and more frequent storms such as the one that hit East Islands are huge threats to atolls all over the world. In 2016, researchers found that five islands in the Solomon Islands had been lost to rising seas and erosion, a direct result of climate change in the Pacific. More will likely follow.