Global warming might lock California in drought for centuries

California’s current dry spell is among the worst in 1,200 years as trillions of gallons of groundwater have become depleted yearly with no signs of stopping. American researchers from UCLA claim, however, that this shouldn’t surprise us given that the state has a long history of droughts caused by warming events, some of which lasted for thousands of years. Their analysis suggests that given the current warming trend, this time mainly triggered by greenhouse gasses, California could become plagued by droughts for centuries.

Forget droughts, this is a shift towards permanent aridity

The team, led by professor Glen MacDonald, chose to harvest sediment cores from the bottom of the Kirman Lake in the Sierra Nevada mountains due to its climate sensitivity and long geological history. If you visit the lake today, you’ll find a small, 16 feet deep freshwater basin filled with trout. Throughout the millennia, though, Kirman Lake has repeatedly been subjected to periods of complete dry-out and replenishment. All of this got recorded in the white sediments that accumulated at the bottom of the lake.

By analyzing the 2-inch-wide, 10-foot-deep cylinder of sediments extracted from the bottom of the lake, the UCLA researchers gleaned into the lake’s geological and climatic history, which offered solid hints about California’s history at a whole up to 12,000 years ago.

For instance, charcoal deposits indicate the presence of wildfire; pollen tells us whether there were more pine tree or sagebrush; mollusk shell fossils hint how deep or warm the water in the lake was when the animals grew their shells; and carbon and nitrogen molecular distribution gives us clues about the lake’s salinity, as well as abundance or waning of plant and animal life.

The final analysis, which took years to make, paints the most accurate picture of California’s climate history to date. The findings were correlated with other similar studies, but also with histories of the Pacific Ocean’s temperature taken from marine sediment cores and other sources. This will prove important.

Between 6,000 and 1,000 B.C.E., during the middle of a period called the Holocene, core samples suggest that California went through a dry period that lasted 5,000 years. During this time, Earth’s orbit varied slightly, but enough to cause more solar energy to hit the Northern Hemisphere during the summer months. Sediment records show the Pacific ocean was in a La Niña-like state which drastically reduced precipitations and made California warm and dry.

A similar, albeit much briefer, period was seen between 950 and 1250 C.E, which paleoclimatologists commonly refer to as the medieval climate anomaly. Decreased volcanic activity and an upsurge in solar activity characterized by more sunspots increased radiative forcing and ultimately led to considerable warming in California, as in most parts of the world. For instance, Greenland — now covered in ice — was green and welcoming to Viking settlers who formed permanent communities there, before they were forced to leave by a sudden cooling a few centuries later. Again, this period was characterized by La Niña reigning over the Pacific Ocean.

“We suspected we would see the millennia of aridity during the mid-Holocene at Kirman Lake, but we were surprised to see a very clear record of the medieval climate anomaly as well,” MacDonald said. “It was very cool to see the lake was sensitive on the scale of not just thousands of years, but also something that lasted just a few centuries.”

“This change at 2,200 B.C. was a global phenomenon,” MacDonald said. “It’s associated with the collapse of the Old Kingdom in Egypt. It’s linked to the decline of the Akkadian Empire in Mesopotamia and similar Bronze Age societal disruptions in India and China. It was amazing to find evidence of it in our own backyard.”

This historical timeline, as well as what we know about climate science, suggests that increased radiative forcing can lead to virtually indefinite periods of dryness in California. This is something that the sunny state might go through in the coming decades, only this time, the increase in radiative forcing is primarily cause dy greenhouse gas build-up in the atmosphere, not natural variability due to the planet’s orbit or the sun’s activity.

“Radiative forcing in the past appears to have had catastrophic effects in extending droughts,” said MacDonald, an international authority on drought and climate change. “When you have arid periods that persist for 60 years, as we did in the 12th century, or for millennia, as we did from 6,000 to 1,000 B.C., that’s not really a ‘drought.’ That aridity is the new normal.”

California is the leading agricultural state in the U.S. It’s here that a sizable majority of American fruits, vegetables and nuts are produced including 99 percent of walnuts, 97 percent of kiwis, 97 percent of plums, 95 percent of celery, 95 percent of garlic, 89 percent of cauliflower, 71 percent of spinach, 69 percent of carrots and the list goes on and on. MacDonalds says the state will be able to sustain sizable agricultural yield despite dry conditions thanks to human engineering like irrigation works. Productivity will be seriously hampered, though, and food prices could jump across the nation.

“I think we would find a way to keep our cities going through prolonged drought, but we’re not going to engineer a way to conserve or preserve the ecosystems of the state,” MacDonald said. “We can’t save our huge expanses of oak woodlands, or our pine and fir forests, or high-elevation alpine ecosystems with irrigation projects like we might our orchards and gardens. I worry that we will see very different wildlands by the end of this century.” 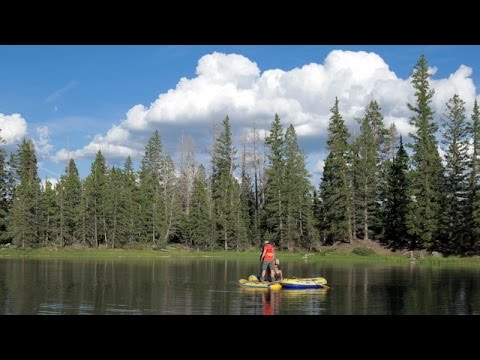