Book review: ‘The Fate of Rome: Climate, Disease, and the End of an Empire’

Every empire has an apex, it also has a breaking point from which it spirals-down into insignificance.

by Tibi Puiu
in Books, Climate
Reading Time: 3 mins read
A A
Share on FacebookShare on TwitterSubmit to Reddit 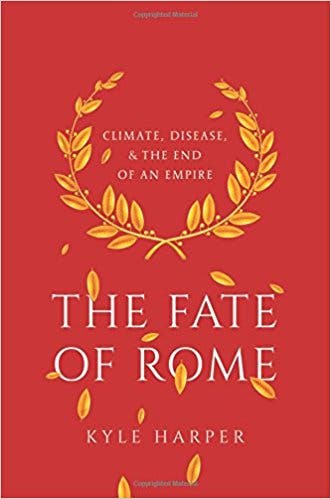 “The Fate of Rome: Climate, Disease, and the End of an Empire”
By Kyle Harper
Princeton University Press, 440pp | Buy on Amazon

From its founding in 625 BC to its fall in AD 476, the Roman Empire conquered and integrated dozens of cultures. Much has been said about what’s perhaps the most influential state in history. Modern countries owe their language, civil codes, laws, and heritage to the Romans. But although every empire has an apex, it also has a breaking point from which it spirals-down into insignificance.

Much has been written about the downfall of the Roman Empire. Many have argued that rampant corruption and too much pressure, due to its phenomenal expanse for an Iron Age state eventually destroyed Rome.

In an impressive scholarly work, Kyle Harper, a professor of classics and letters at the University of Oklahoma, offers a new and refreshing perspective on this topic of major importance. In The Fate of Rome: Climate, Disease, and the End of an Empire, Harper puts nature at the center of Rome’s undoing.

The author argues that the empire’s very strengths — travel, trade, migration — which raised it to such great height also accelerated its demise. All roads lead to Rome, as the saying goes, but along with merchants and provincials from all corners of the empire, they also brought tuberculosis, leprosy, smallpox, plague, and other diseases. Not just once was the empire crippled by pandemics like The Antonine Plague (165-180 AD) which decimated legions and up to 15 percent of the population.

Supported by modern studies which cleverly infer the ancient climate from proxies like sediment cores or tree rings, Harper also makes a solid case that a drier climate during the empire’s later period also contributed significantly to its downfall. Unlike the anomalously favorable climate during the Roman Climate Optimum — some 350 years of unusually warm and moist climate between around 200 BC and AD 150 which helped the empire rise to power — the following centuries came as a wakeup call.

In the third century AD, Rome was struck by drought in the southern Mediterranean, especially Rome’s breadbasket, Egypt. Political upheaval was inevitable, runaway inflation was rampant as coins were debased, and, yet again, plagues ran amok (perhaps even from Ebola, the author argues). For instance, the Justinian plague of AD 541 halved the Eastern Roman Empire’s population.

Pressured by an unkind environment and climate, Rome grew feeble and vulnerable in the face of invaders like Goths, Persians, and Franks, who seized the opportunity and overrun Rome’s weakened borders.

Of course, Harper’s thesis isn’t that the climate and disease are what brought down Rome. The human factor played a role that was at the very least as important but this book offers a context for an incredibly complex system. In some instances, nature’s force was just enough to tip the scales either in Rome’s favor or to its disadvantage during its history.

And if all of this sounds strikingly familiar, it’s because we’re also living at crossroads. In only 150 years, the globe has warmed by nearly 1 degree Celsius, an unheard of rate in millions of years. If there’s anything we have to learn from Rome, it’s that we should never underestimate nature. But unlike the Romans who were largely ignorant, at the mercy of the gods if you will, we have science. It’s time to act before the downfall of Rome mirrors that of modern civilization.

It has to be mentioned that Harper spared no expense, presenting his thesis in exhaustive detail. Some uninitiated readers might find this daunting but it is my impression that his extremely compelling writing, which is rather rare for a scholarly work, makes up for it. This is certainly not a book you can go through on a rainy afternoon but neither is it boring, to say the least.