How air conditioning is making your city hotter

Air conditioning may make your home cooler, but it's making your city hotter - cities can be even 3 degrees hotter than the surrounding environment, and ACs play a big role in that, a new study shows.

by Dragos Mitrica
in Climate, News
Reading Time: 2 mins read
A A
Share on FacebookShare on TwitterSubmit to Reddit

As temperatures continue to rise around the world (sorry “climate change deniers“), the demand for air conditioning increases – but ironically, that’s causing cities to become more and more hot. 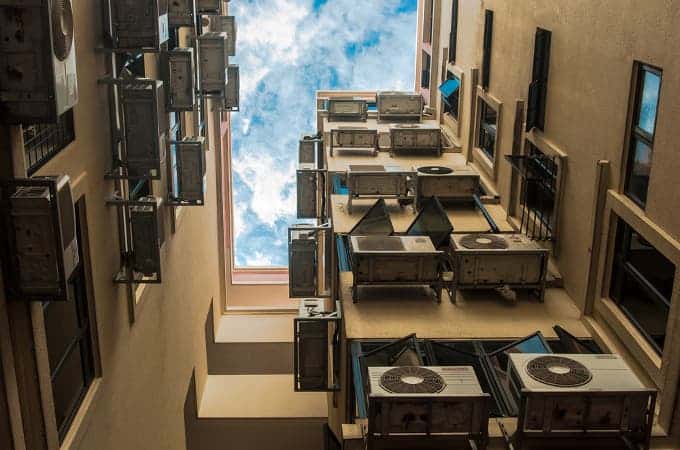 “General AC systems absorb heat (cooling the indoor air) from the interior of the buildings and release heat into the surrounding outdoor environment,” write researchers from Arizona State University in the Journal of Geophysical Research: Atmospheres. An individual unit obviously doesn’t produce all that much ambient heat, but when you combine all the cooling in cities where it’s hot enough to cook dinner on the pavement, you can make a real difference.

What they did is modeled a system using both building energy schemes and climate inputs, simulating a “10 day extreme heat situation”, something which is already quite common in the city of Phoenix. They found that during the day, the negative contributions of ACs was not significant, but during the night, it was. When a building’s floor area was fully air conditioned, that raised the nearby temperatures by as much as 1.5 degrees Celsius (2.7ºF) during nighttime hours. When they added more parameters to compensate for realistic conditions, they still wound up with 1 degree Celsius. When you take a heavily urbanized area such as Phoenix, where virtually all the buildings have air conditioning, that 1 degree rise is sent throughout almost the entire city.

To make things even worse, the extra warmth piles up over the urban heat island effect, and if scientists’ calculations are correct, then an average city of 1 million inhabitants can be 3 degrees Celsius hotter than its surroundings – and ACs play a significant role. Ironically, they cool off buildings, but make the environment hotter, so there’s more need for cooling off buildings.