China has finally clarified the legislation regarding the consumption of endangered species. It remains to be seen if the law will be enforced, but at least, it’s clear for everybody that it is illegal to eat endangered animals or take their body parts for trophies.

The phrasing of the legislation was pretty strange, with some ambiguous parts leaving a lot of room for interpretation – but that’s all changed now. Chinese law now makes it illegal to hunt and buy 420 of the country’s protected endangered species, and anyone caught in the act risks a lot of jail time – no more room for misinterpretation.

The world’s most populous country, as well as one of the world’s biggest biodiversity hotspots, China is also one of the biggest enemies to biodiversity. Many endangered animals are used in traditional medicine, others are regarded as a sign of status, while others are simply desired meals. The endangered pangolin for example can be found in several high-end Chinese restaurants, with a serving costing over $300. Virtually all body parts of tigers are used in traditional medicine; the tiger’s penis regarded as an aphrodisiac, the bones are used to treat arthritis, the blood is thought to build willpower, and even the tiger’s feces are thought to have some healing properties, useful in treating hemorrhoids. Tigers, like many other endangered animals are grown in farms for their organs throughout the country. Needless to say, there is no proven medical utility (not that that would justify it anyway). But the tiger isn’t an isolated example – other animals suffer a much crueler fate.

Bile from Asiatic black bears is used to treat liver ailments, tapeworm, and colds. The way through which the bile is extracted is excruciating – the bear is tightly confined in a “crush cage” as a catheter implanted in its gall bladder drains the bile out. The situation isn’t helped by the fact that China doesn’t have a ban on animal cruelty. Thousands of bears are grown in Chinese bile farms, and keep in mind – we’re talking about an endangered animal here! 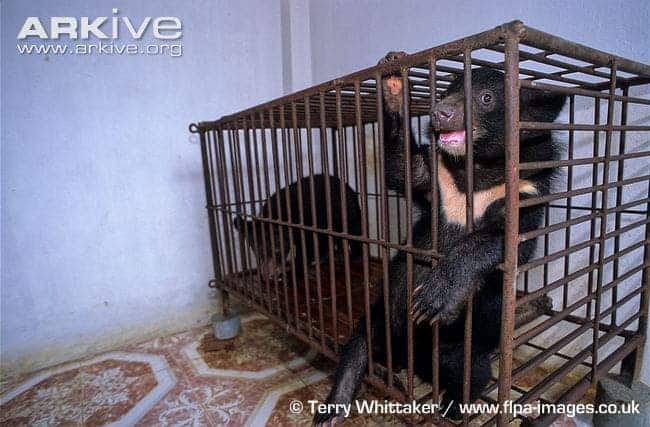 But when it comes to black market value, nothing comes even close to the rhino’s horn. Pound for pound, a rhino’s horn is worth more than gold and platinum. If the current trends continue, rhinos could become extinct in just a several years. As a matter of fact, a recent study concluded that rhinos may even go extinct in the wild by 2020.

The tip of the iceberg

This change in the legislation should have happened a long time ago. China has a long record of not really giving two cents about animal cruelty and biodiversity conservation, but recently, they’ve started to take some measures in the right direction. An ancient dog eating festival was banned in 2013 and in January, China destroyed 6 tonnes of ivory, as an anti-poaching message. But doest this actually mean something, or is it just good PR? It’s hard to say.

According to the International Fund for Animal Welfar, the illegal wildlife trade is worth at least $19 billion, making it the fourth largest illegal activity globally by value. It is also linked to money laundering and drug trafficking, and enforcing wildlife protection is extremely difficult, especially in China, one of the most corrupt developed countries.

Also, the 420 species listed in the law are just the tip of the iceberg – there are in total 6500 species of endangered vertebrates in China, and there is also a demand for foreign animals. But to me, the bigger problem is that it’s still legal to breed these animals in captivity – which makes it quite hard to prosecute someone; he can claim the animal was bred in captivity, and forge some paperwork to do that (something which is not extremely hard). Is the poaching industry going to solve this by simply falsifying some papers? It remains to be seen. Either way, it’s a very small step, but a step in the right direction nonetheless.