Puffins mate for life but when they also travel together, they become better parents.

Scientists have known for a long time that some birds, especially long-lived birds, are monogamous. Swans, albatrosses, and puffins all do it, and the reproductive performance of the pairs is very important for the success of the offspring — in other words, birds which have been together a long time are more likely to raise healthy, successful offspring. But how do the pairs keep in touch with each other while migrating over large distances?

A new study wanted to see whether puffins stay together when they migrate and what kind of effect this has on their relationship. Their research shows that pairs migrate to the same places, and although they might not stay very close to each other, they start from the same place and end up in the same place, finding each other when they arrive at the destination. Another interesting finding is that the pairs which remained closest to each other at all times were much more successful parents, so basically, proximity is important for reproductive success — although it’s not entirely clear why.

Other factors were also important for the success of the puffin parents. For instance, female puffins that foraged more over winter were able to lay eggs earlier and rear pufflings more successfully, something which makes a lot of sense. Dr Annette Fayet, a Junior Research Fellow of Queen’s College, Oxford and of the Department of Zoology at Oxford University, the lead author of the study, said:

“While migrating close to one’s partner leads to more successful breeding in puffins, female winter foraging effort seems to be even more critical to ensure high reproductive success.  A likely explanation for this finding is that female puffins which spend more time fuelling up over winter return to the colony in better condition and are able to lay higher quality eggs, rearing stronger chicks.” 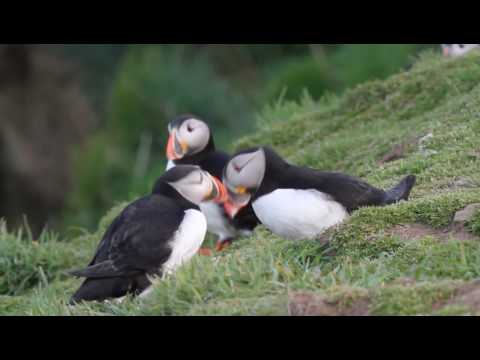 Researchers say that the advent of modern technology will greatly help with the study of puffins. Modern surveillance allows biologists to better track the movement patterns of birds, while complex algorithms can identify patterns in the behavior of birds. This will help us study seabirds’ at-sea ecology and behaviour, which is currently poorly understood, but extremely important for conservation purposes. Numerous species of seabirds are currently threatened by ocean pollution and over-fishing, making them the most at-risk bird category. Puffins are no exception, with numbers drastically declining in recent years.

“At the end of the breeding season puffins disappear at sea for over eight months before returning the following spring, and scientists have long had questions about where they go during that time,” Fayet said. “However, until recently tracking devices were too big to use on small birds like puffins. The recent miniaturization of tracking technology means we can now study the at-sea movements of puffins and other small migratory seabirds remotely over months and even years.”