5 romantic animals that mate for life

There are some that you wouldn't expect.

by Elena Motivans
Reading Time: 4 mins read
A A

Who doesn’t want a lifelong love? Having one partner for a whole lifetime may be a human ideal, but some animals are also faithful to their partners. Okay, it’s probably not because of love, but for survival. Having a lifetime partner helps a female protect herself and her young better. Paternal care is more common in these animals, meaning that their offspring usually have a better chance of survival. Other possible reasons are that it’s hard to find a mate, there are net benefits, or for territory defense. For whatever reason, these animals prefer to spend their lives together with a single partner, similar to humans. Here are some animals that are secret romantics and mate for life:

After they mate, loon (Gavia immer) pairs stay very close to each other, usually less than 20 m (65 feet) apart. They each keep an eye on each other and make sure that their partner doesn’t stray before the eggs are laid. If they do become separated, both the male and the female make an effort to be close to each other again. In most other animals, it’s either the male or the female that is clingy, not both. As a team, the loons are better at capturing fish and taking care of their young. They only lay a few eggs, which require extensive parental care. It’s also easier to defend their territory against intruders, who may try to displace the male and take over the female and territory. 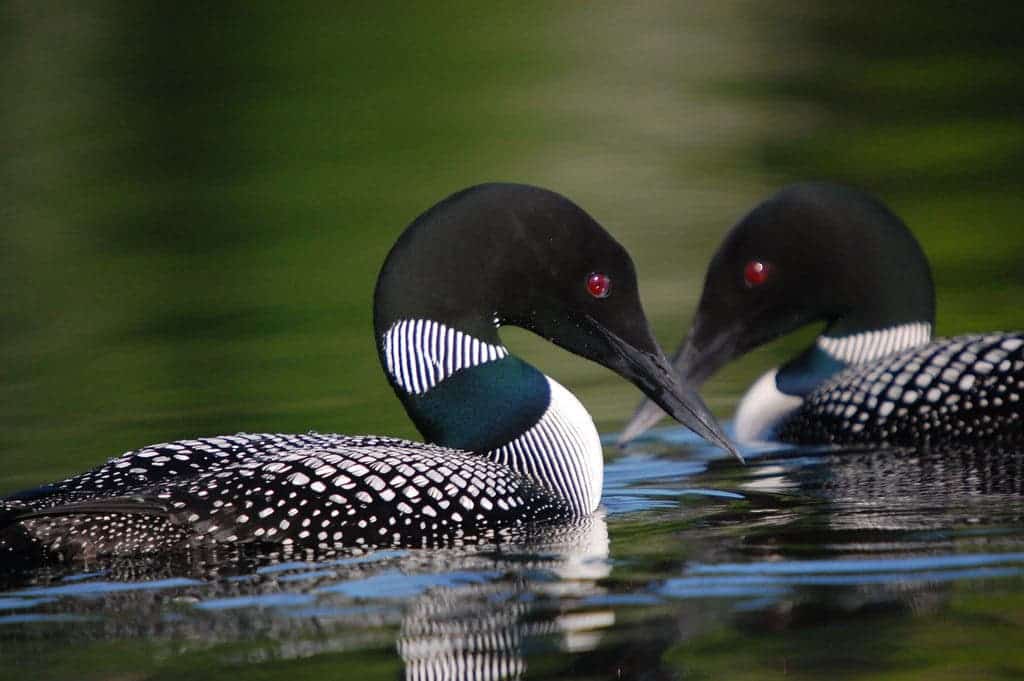 Venus’ flower-baskets are beautiful hollow glass sponges. However, the focus here isn’t on the sponge, but on what lives inside of it. Shrimp in the genus Spongicola use the inside of the sponge as their home. The sponge cavity is so tiny that there is only enough room for two shrimp inside. Because of this, these shrimp mate for life. They are stuck in these sponges for their whole lives. The pair passes their time cleaning the sponge and eating food that drifts through the sponge pores. After they breed, their tiny offspring disperse out through the sponge pores, but they will eventually find the same fate: a tiny home with a single mate. In Japan, it was a common wedding present to give one of these sponges with two dead shrimp inside, as a symbol of lifelong unity. Romantic or creepy?

Multiple species of skinks, Australian lizards, take only one mate. Shingleback skinks (Tiliqua rugosus) live alone most of the year but find their same partner every mating season. They have a two-month long “courtship” period before they mate, in which they get to know each other and engage in lots of licking and touching. They form loyal pairs for up to 20 years; their average lifespan is 15 years. Gidgee skinks (Egernia stokesii) live in small family groups (up to 17 lizards) that last for at least 5 years. Breeding partners stay together and mate together year after year.

These voles (Microtus ochrogaster) are unusual from most other rodents in that they find a partner, groom each other, build a nest, and raise their young together. The rodents live for just a year or two and can better look for food and have more offspring together. Higher levels of certain neurotransmitters keep them bonded and promotes aggression towards any non-mate. Instead of being attracted to foreign voles, they are programmed to be aggressive. Prairie voles also mourn the death of their partners. These voles are used as models to help understand mating and monogamy in humans.

Unusually for fish that fertilize their eggs externally, largemouth bass (Micropterus salmoides) are loyal to their partner. After a courtship ritual, the successful male can fertilize the eggs that the female lays. Males and female both build a nest, usually on a log or rock. When the eggs are laid, they both care for them. They often remain with their hatchlings up to a month after they hatch, which is an extremely long time for fish. This is the first evidence an animal that fertilizes eggs externally is faithful to their partner.

Maybe it’s animal nature, but from a human perspective, these animals are quite the romantics!