Luckily, they seem to be doing well.

by Elena Motivans
in Animals, Discoveries, News
A A

It is amazing that although humans have taken up almost every corner of the globe, there are still animals that we don’t know very much about. The Highland Wild Dog is one of the rarest and most ancient canids. It lives in New Guinea but has only been seen very rarely. They were thought to be extinct because no one had any confirmed sighting of them for about 50 years.  Last autumn, researchers from the University of Papua (UNIPA) went looking for the dogs in remote mountainous areas next to Puncak Jaya. They found very active groups of them; the droppings that they found and photos that they took were enough to have a good idea of them.

The first Highland Wild Dog was collected and described by Charles Walter de Vis in 1897, who found it at 2400 meters on Mount Scratchley, Papua New Guinea. In 1956, two more were found in the Southern Highlands Province and sent to the Taronga Zoo in Sydney, Australia. There they were declared to be a distinct species, Canis hallstromi. Five more were captured in 1976.

All of these captive dogs were interbred to be the domesticated New Guinea Singing Dogs. In the Bahasa Indonesian language, the dogs are called Anging Penyani , which means “dog that sings”. The singing refers to their distinctive vocalisations. Their singing talents are why the captive-bred dogs are called New Guinea Singing Dogs. There are about 200 of them in the world. However, it is unknown how similar they actually are to their wild counterparts. The dogs hadn’t been confirmed to be seen in the wild since 1976. 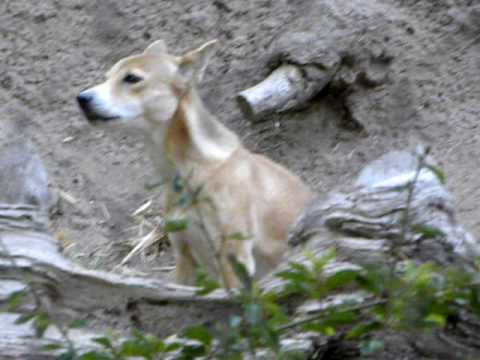 This recent excursion undertaken by the University of Papua and Mac McIntyre found proof of the wild dogs. In the dogs’ historic range in the mountains near Puncak Jaya, the researchers placed cameras next to baits to attract the dogs. Over 140 images of the dogs were captured living at 4500m. They also found pawprints and scats.

The researchers found enough dogs to see that there was a healthy group. In total, 15 separate animals were seen; 3 adult males, 3 adult females, 2 pregnant females, 3 adolescent aged dogs, and a female with three (approx. 3 month-old ) puppies. The pregnant females were likely to give birth in the spring, given the timing of their pregnancy. The dogs were active both in the night and day, as long as the weather was clear. It seems like the dogs live in small social groups with overlapping territories but it’s not clear yet how the social groups are arranged. As for their appearance, the Highland Dogs were coloured cream to ginger and black with white markings. They carried their tails hanging in a fishhook over their backs.

Some of their scats were found, giving the researchers insight into their diet. The Highland Dogs eat small and large mammals, such as mice, cus cus, and birds. These dogs are the top predators in the region and therefore play an important role in their habitat.

It’s hard to tell apart Highland Dogs from the village dogs (a mix of many dog species including Highland Dogs) in a nearby village just by their appearance. However, DNA confirmed that these sightings are the real deal. Faecal samples found last fall were DNA tested and found to be similar to dingo and the village dogs’ DNA. They were different enough from the village dogs. The exact relationship between these three species is not known yet, but work is on-going. According to fossils, the Highland Dogs established themselves on the island 6,000 years ago. It’s not known whether they arrived with humans or separately.

The New Guinea Highland Dogs live in very remote locations that are far from humans and other dogs. The Highland Dogs are reclusive by nature, so it’s no wonder that they haven’t been seen in so long. The dogs are important in the evolution of dogs; they are the best example of dogs before they were domesticated by humans. Thankfully, the Highland Dogs were found in their native and historical range and seem to be doing well.