by Tibi Puiu
in Animals, News, Space
A A

Humanity dreams of one-day becoming an interstellar species. But before that happens many challenges need to be addressed. Studies have shown that long-stretches of exposure to space can have important consequences for the health of astronauts. For instance, astronauts stationed aboard the International Space Station (ISS) have reported muscle and bone loss, poorer vision, DNA and brain structure alteration, and other effects. In order to better understand how space affects basic biology, NASA has performed over a dozen experiments with mice on the ISS since 2014. The most recent findings suggest that rodents are well accustomed to life in microgravity — and have even learned to do some nifty tricks.

A small group of mice spent 37 days in microgravity — which is equivalent to a long-duration mission (18 months) given a rodent’s lifespan — inside NASA’s Rodent Hardware System, which is basically a high-tech cage. The rodent space habitat was specially designed to accommodate mice in groups, in order to reduce stress and better record the motions of the animals. Unlike previous space habitats, NASA’s most recent version also included grates on its wall which the rodents could grab onto.

NASA scientists focused on observing the behavior of the rodents, looking for anything peculiar. When compared to mice that stayed on Earth, the space mice were remarkably similar. The mice behaved as they normally would: feeding, grooming their fur, huddling together, and interacting with their peers. By the end of the study, space mice weighed about the same as their Earth counterparts and their fur was in excellent condition, both signs of good health.

The rodents aboard the ISS quickly adapted to their environment, anchoring themselves to the habitat walls with their hindlimbs or tails and stretching out their bodies. The same pose is commonly employed by mice on Earth, which stand up on their back legs to explore their surroundings.

“Behavior is a remarkable representation of the biology of the whole organism,” said April Ronca, a researcher at NASA’s Ames Research Center and lead author of the study published in the journal Scientific Reports. “It informs us about overall health and brain function.”

Space mice also exhibited some remarkable, never-before-seen behavior. The experiments included both younger and older mice, and it seems like the younger mice would sometimes run laps around the cage, an activity which NASA scientists have called “race-tracking”. 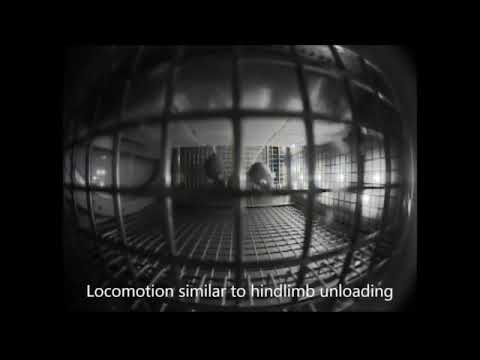 Researchers aren’t sure what spurred this behavior, although some reasons may be for physical exercise, as a response to stress, or for stimulation of the body’s balance system which is thrown off by microgravity. Future experiments in space involving mice will now have to take into consideration the increased blood flow due to the extra activity.

Far from feeling threatened or stressed, these mice seem to be enjoying living in space.

“Our approach yields a useful analog for better understanding human responses to spaceflight, providing the opportunity to assess how physical movement influences responses to microgravity,” the researchers concluded in their paper.