by Mihai Andrei
in Environment, News, Offbeat
A A

Adidas new shoes are trash – literally. The German company has announced the creation of a new type of shoes made from recycled garbage pulled out of the ocean; the sustainable prototype has the upper part made entirely of yarns and filaments reclaimed from illegal deep-sea gillnets and other ocean waste, while the bottom part is made from sustainable cushioning material.

The prototype design was unveiled at United Nations Headquarters on 1 July 2015 and it marks the beginning of the partnership between Adidas and Parley for the Oceans, an organization which develops projects to promote the sustainability of the oceans and eliminate pollution.

“We are extremely proud that Adidas is joining us in this mission and is putting its creative force behind this partnership to show that it is possible to turn ocean plastic into something cool,” Parley founder Cyrill Gutsch said.

Adidas was also thrilled by this new direction that they’ve taken.

“The concept shoe illustrates the direction adidas and Parley for the Oceans are taking, ahead of consumer-ready ocean plastic products being revealed later this year.” 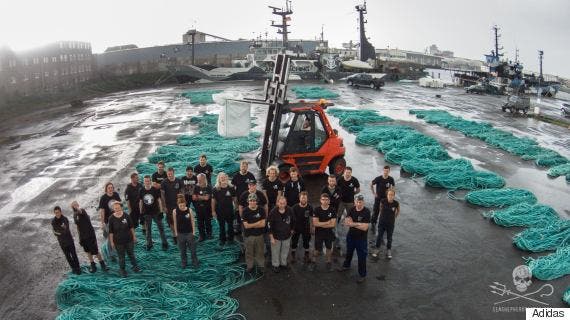 But gathering the material and developing the product was not easy. he Sea Shepherd Conservation Society, which collaborated on the project actually retrieved the trash over a 110 day expedition to track an illegal poaching vessel off the coast of West Africa. The green fishing nets collected during that voyage can be seen in the design of the upper shoe.

For now, the shoe is only a prototype, and it’s not for sale; it’s unclear whether or not it will be in the near future. However, Adidas did announce that they will incorporate recycled plastic into its shoes by early next year. So you will be able to wear recycled plastic on your feet… it’s just likely not ocean plastic.