2013 World Solar Challenge may feature the street cars of tomorrow 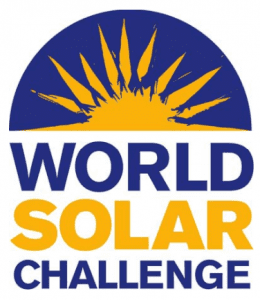 The  World Solar Challenge  is a biennial race from Darwin to Adelaide, spanning 3000km of the Australian outback. It attracts teams from around the world, mostly from universities, with 37 teams from 20 countries participating in the 2011 race. What so special about it? All cars need need to be completely solar powered. Innovative and edgy, entries surpass previous models each year, acting as a fantastic testing plane for actual street cars that might one day use solar photovoltaics to power them, or some of the power at least.

In previous years, the cars would all more or less sport a similar design: three very slim and sleek wheels to minimize road drag, extremely lightweight, a  crammed pilot seat and, of course, every possible kind of real-estate filled with PV cells. This edition, however, things are different after three competing classes were introduced: adventure class (for sleeky, fast, but less practical solar cars), cruiser class (here the goal  is not speed but practicality, with the ultimate goal of an entrant being able to meet the requirements for road registration in the country of origin) and challenger class (single seat aerodynamic masterpieces built for sustained endurance and total energy efficiency).

University of Michigan is in the race with its 2013 Generation, which makes the best of new regulations that require four wheels and a more upright driver. Like a motorcycle with a sidecar, Generation situates the driver on one side, rather than in the middle of the chassis. The design allows for a sleeker underbelly and a more aerodynamic silhouette. The car weighs less than 600 lbs and has a lithium ion battery and a carbon fiber body.”I always say it handles like a Porsche but accelerates like a go-kart,”  said  Kyle Chudler, a junior in atmospheric, oceanic and space sciences. “It handles really well but it doesn’t have the most thrust.”

University of New South Wales (UNSW eVe) is entering with a solar vehicle that they hope will would pass street registration in Australia. Still, don’t think it looks like your typical street car: the two-seater still bears the marks of the need for efficiency: as well as being more aerodynamic than most sedans (which are generally bricks with engines), it’s got the extremely skinny wheels needed to minimise road drag

Solar Team Eindhoven, which is also contesting the cruiser class with what it says is the “world’s first solar family car”. Its four-seater, dubbed Stella, is designed to have a battery range of 600 km, and the team claims its panels generate enough electricity to make the vehicle energy-positive, able to return power to the grid. According to the team, their ultimate goal is to drive a family from The Netherlands to France in one day. Remember, all solar power!

The Stanford Luminos is also a four-wheel car, which according to the team is already street legal in the U.S.! Its makers claim the vehicle produces less drag than a cyclist, however despite being four-wheeled it won’t race in the cruiser class. The $US1.4 million four-wheeler, at 170 kg (375 pounds), is carrying a fair amount of weight, but the Stanford team hopes their high-efficiency (97 percent) electric motors will make up for some of that heft.

Team Cambridge on the other hand is competing with Resolution, a solar car weighing in only at 120 kg. It also has something special about it. While the other entries have PV cells statically layered on the car chassis, team Cambridge has movable solar panels  mounted on-top a tracking plate, which means its PV cells aren’t caught in the shadow when the sun is at the horizon. Maximum efficiency!

The 2013 World Solar Challenge starts on October 6, and ends on October 13. Visit the official website for more info and coverage. Below you can find a full list of all the team entering the competition via solarracing.org.