Exclusively solar-powered plane will circumnavigate globe in a non-stop flight, even at night

by Tibi Puiu
in Renewable Energy, Science
Reading Time: 2 mins read
A A
Share on FacebookShare on TwitterSubmit to Reddit 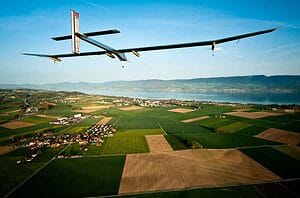 Solar Impulse, the now famous 100 percent solar-powered aircraft, made the headlines after it proved it could fly for 26 hours straight, be it day or night. Now the projects’ initiators want to take the plane and solar power to new dazzling heights – they want to circumnavigate the globe in 20 days and 20 night flight all powered by solar energy.

Solar Impulse ins’t the first solar powered plane, however where it shines is that it can fly both during the day and night thanks to its system that powers both the plane’s engine rotors and charges its battery at the same time. The fragile aircraft, which weighs less than a SUV, spans  63-meter-wide wings crafted from carbon fiber and covered with 10,748 solar panel; another 880 cover the horizontal stabilizer, bringing the total number of solar panels to around 12,000. These solar panels generate enough energy to power four 8HP rotors, coincidentally the same amount of horse power the Wright Brothers were working with at Kitty Hawk.

The low horse power shows, as Solar Impulse can’t travel at more than 30 miles per hour, meaning that it needs 20 days and 20 nights to circle the globe. The pilot flying Solar Impulse will be Bertrand Piccard, the same pilot that flew the plane during its record 26 hour non-stop flight and the  first to circumnavigate the globe nonstop in a balloon.

“The sunset is gorgeous, but the sunrise of course brings the next day,” Piccard told 60 Minutes. “It brings the hope again that you can continue.”

Piccard and the sponsors backing his project hope the first attempt can be made as early as 2015, as preparations and much needed modifications need to be made. Remember, his non-stop all solar powered flight with Solar Impulse was made exclusively circling Switzerland, his home country. The fragile plane would have to face storms and thousands of miles worth of traveling over the ocean at an altitude of 12,000 feet. This is not a mission without peril, but the glory is maybe as exciting as Amelia Earhart’s trip.