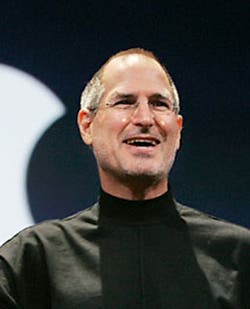 Steve Jobs, co-founder of apple and the visionary mind behind the company’s products has passed away, at the age of 56, after a long fight with cancer. As word of his death spread, people remembered him as the innovator he was, and as the man who made technology seem so close and personal; the man who turned a garage start-up into a multi billion dollar business that pleases hundreds of millions of people throughout the world is no longer with us – but he lives on through his work.

So let’s not get sad that he’s dead, let’s be happy that he was alive, and that he gave so much to us. Here’s a few of his words:

Your time is limited, so don’t waste it living someone else’s life. Don’t be trapped by dogma – which is living with the results of other people’s thinking. Don’t let the noise of others’ opinions drown out your own inner voice.

Being the richest man in the cemetery doesn’t matter to me… Going to bed at night saying we’ve done something wonderful… that’s what matters to me.”

In most people’s vocabularies, design means veneer. It’s interior decorating. It’s the fabric of the curtains and the sofa. But to me, nothing could be further from the meaning of design. Design is the fundamental soul of a man-made creation that ends up expressing itself in successive outer layers of the product or service.

The most compelling reason for most people to buy a computer for the home will be to link it to a nationwide communications network. We’re just in the beginning stages of what will be a truly remarkable breakthrough for most people – as remarkable as the telephone.

Rest in peace, Steve Jobs. You, and your work, will not be forgotten.