Finally, someone invented the thermometer for the nanoscale

Up until now, there was no reliable way to measure the temperature of nanoscale objects, like viruses.

Up until now, there was no reliable way to measure the temperature of nanoscale objects, like viruses. Finally, a group at IBM from the same research lab that gave the world the scanning tunneling microscope and the atomic force microscope found a workaround. The researchers devised a technique that relies on measuring both heat flux and thermal resistivity. Combined, they can read temperature with a few-miliKelvin and few-nanometer spatial resolution.

A typical thermometer works by reaching thermal equilibrium with a body. In time, the hotter body will lose its energy to the colder one until both reach the same temperature. This is why you have to wait a while with the thermometer inside the back of your tongue or inside your armpit. Obviously, this is impossible to do for objects thousands of times thinner than a strand of hair.

Previous efforts focused on building a tiny nanoscaled thermometer that might measure the temperature of equally small targets. Dr. Bernd Gotsmann, an IBM scientist, and colleagues realized this is cumbersome and scrapped any such thought. Instead, IBM combined local thermal sensing with the measuring capability of a microscope — enter the real of scanning probe thermometry.

The technique relies on a single non-equilibrium scan using a scanning probe. In other words, the two — probe and nanoscopic object — cannot thermally equillibrate. No problem, the work around is to measure the discrete changes of heat flux and resistance to heat flow.

“The technique is analogous to touching a hot plate and inferring its temperature from sensing the heat flux between our own body and the heat source. Essentially, the tip of the probe is our the hand. Our perception to hot and cold can be very helpful to get an idea of an objects temperature, but it can also be misleading if the resistance to heat flow is unknown.”

According to IBM, the scanning probe thermometer proved accurate in measuring the temperature of an indium arsenide (InAs) nanowire, and a self-heated gold interconnect. Not only is the probe thermometer accurate, it’s also easy to operate, build and versatile seeing how it can be used to measure both nano and micro sized objects. Now, researchers all over the world can measure hot spots that affect the physical properties of transistors, memory cells, thermoelectric energy converters or plasmonic structures. “The applications are endless,” says IBM.

“We hope the paper will produce both a lot of excitement and relief for scientists, who like us, have been searching for such a tool,” said Gotsmann. “Similar to the STM, we hope to license this technique to tool manufacturers who can then bring it to market as an additional function to their microscopy product line.”

A patented invention was described in the journal Nature Communications. 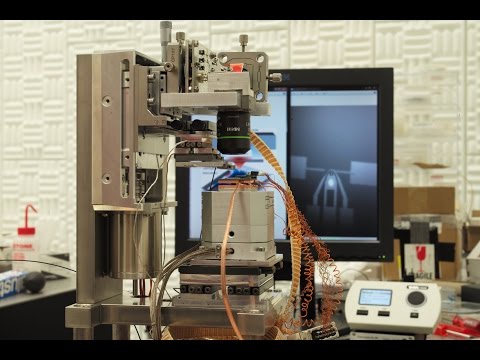