Amputee can feel fine textures again with a bionic fingertip

You might be able to grip, grab and direct hand movements with a prosthesis as if it were your own biological hand, but without the exquisite sense of touch life is not only stale, but also challenging. We're coming close to a singularity in prosthetic research, however -- having bionic arms that sense pressure, texture, temperature and humidity just like their biological counterparts.

In 2003, firefighter Dennis Sørensen lost his lower arm in a firework accident after a rocket blew up in his hand. While prostheses have gone a long way — some of which can be controlled using thoughts alone — there’s nothing that can compare to the real deal yet. You might be able to grip, grab and direct hand movements with a prosthesis as if it were your own biological hand, but without the exquisite sense of touch life is not only stale, but also challenging. We’re coming close to a singularity in prosthetic research, however —  having bionic arms that sense pressure, texture, temperature and humidity just like their biological counterparts.

A huge leap in this respect came out of the École Polytechnique Fédérale de Lausanne in Switzerland where researchers devised a bionic fingertip made of  electromechanical sensors that deform when touched. When stimulated, the sensors send an electrical signal to a computer which codes it into a new signal which nerves can ‘understand’.

Silvestro Micera, a researcher at EPFL, connected the bionic finger with Sørensen’s stumpy arm via electrodes surgically implanted. The finger was then moved across plastic surfaces with smooth or rough textures. Sørensen could distinguish between rough and smooth 96 percent of the time.

“I could feel the vibration and sense of touch in my phantom index finger. The touch sensation is quite close to when you feel with your normal finger — you can feel the coarseness of the plates and the different gaps and ridges. I could tell the difference between very rough and smooth — it was amazing!” said  Sørensen, although he was several feet away from the bionic finger itself.

Researchers tested the finger on four non-amputee participants. Although the best results are obtained by surgically implanting electrodes, volunteers were able to distinguish textures 77 percent of the time despite having a single electrode inserted in their upper arms, like an acupuncture needle. 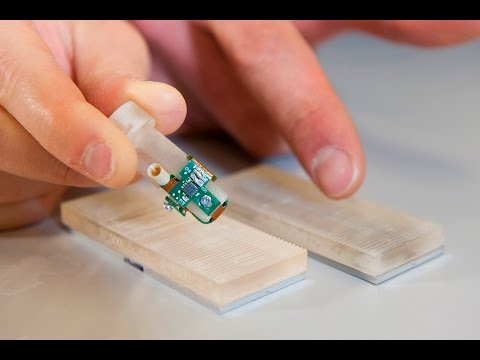 Sørensen, as well as the non-amputees, had their brains scanned while performing the sensory tasks using their real or bionic finger. Brains waves were remarkably similar, suggesting the bionic finger does indeed provide texture perception close to the biological kind.

In 2014, Micera’s team connected Sørensen’s implants to a sensory-enhanced prosthetic hand capable of recognizing shape and softness. In laboratory tests he was able to tell the shape and stiffness of objects he picked up, even when blindfolded. The new work, described in a paper published in eLife, adds a new dimension to the bionic arm, allowing amputees to experience natural stimuli.

“The biggest difference was when I grabbed something I could feel what I was doing without having to look. I could use the hand in the dark,” Sørensen said in 2014 for the BBC.

“It was intuitive to use, and incredible to be able to feel whether objects were soft or hard, square or round,” he added.

On the drawing board there is a bionic arm that can accurately relay temperature information, so that an amputee might feel sensations of warm or cold.