When Voyager 2 made its flyby near the planet of Uranus, astronomers got their first direct glimpse of what an aurora might look on the cold planet. However, such lights have never been observed from Earth – that is, until last year, when a team of scientists used careful planning and the Hubble Telescope to observe the lovely phenomena. 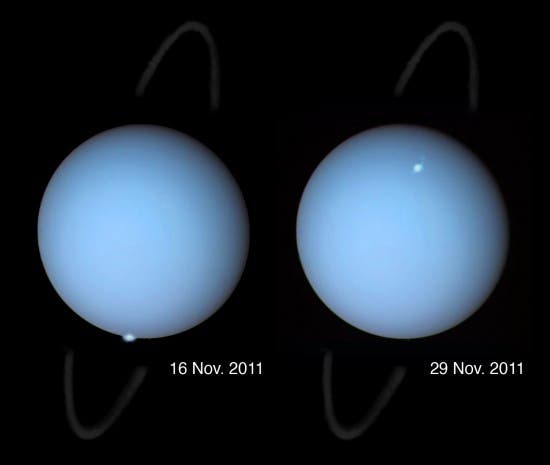 The international team will publish their discoveries in Geophysical Research Letters; wanting to catch auroras is a tricky deal, and one which requires a lot of careful planning, because they are caused by the interaction between charged particles from the sun and a planet’s magnetic field – something which doesn’t happen quite every day. The team first had to wait for a particular arrangement of planets which ensured that the solar wind from the Sun has a direct, open path to Uranus. Then, they had to wait until the sun let loose a burst of charged particles, which happened in September, last year.

After this happened, they calculated how much the solar wind would take to reach Uranus, which was November, then booked time on the Hubble during that exact same period. Their calculations proved correct, and they were able to witness the fascinating phenomena.

But observing the aurora on Uranus isn’t as simple as directing a telescope at the planet. Uranus not only spins nearly on its side, the planet also has an off-kilter magnetic field. By observing how the magnetic field of Uranus functions with something we understand as well as aurora, the researchers hoped to learn much more about the magnetosphere of planets.

“We have ideas of how things work on Earth and places like Jupiter and Saturn, but I don’t believe you really know how things work until you test them on a very different system.”, said Laurent Lamy, the lead researcher on the team, quote by the American Geophysical Union.