by Mihai Andrei
in News, Space flight
Reading Time: 3 mins read
A A
Share on FacebookShare on TwitterSubmit to Reddit

Future lunar missions may be fueled by gas stations in space, according to a new plan developed by MIT engineers. A spacecraft might dock at a propellant depot, somewhere between the Earth and the Moon, and pick up some more fuel before heading on to the moon. 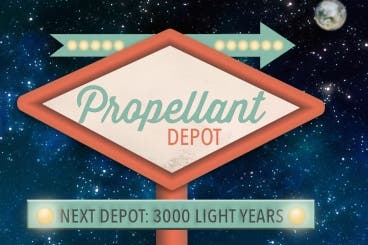 The carry load is still a major problem for scientific expeditions. Basically, you need to carry so much big and heavy equipment; if you were to carry less fuel and refuel somewhere along the way, then ships would be able to carry more equipment, which would translate into better experiments and more scientific value.

Over the last few decades, scientists have proposed various designs to work around this problem, such as building a fuel manufacturing station on the moon and then using it to refill, but the problem with this solution (as well as all other proposed) is that they have huge costs, and require a significant long term commitment.

However, the MIT solution of the space “gas stations” would not require such a long term commitment, and would be significantly cheaper than the other options; they came up with two relatively similar designs. Both of them rely on the fact that each lunar mission carries a supply of “contingency propellant” — fuel that is used only in case of emergencies. In most cases, this fuel is not used, and is either left on the moon or burned up as the crew re-enters the Earth’s atmosphere.

MIT suggests using this contingency fuel for powering up future missions. Basically, what you do is this: if your mission is successfully heading back to Earth and it doesn’t require the contingency fuel, you just drop it off at a depot before heading home. The next mission can pick up the fuel tank on its way to the moon as its own emergency supply. If it also doesn’t need it, then it can also drop it off at the depot, and so on.

“Whatever rockets you use, you’d like to take full advantage of your lifting capacity,” says Jeffrey Hoffman, a professor of the practice in MIT’s Department of Aeronautics and Astronautics. “Most of what we launch from the Earth is propellant. So whatever you can save, there’s that much more payload you can take with you.”

The main drawback of the design is the maintenance cost; you basically have two problems: the first one is keeping depots within the Lagrange point. Lagrangian points are the five positions in an orbital configuration (Earth and the Moon) where a small object affected only by gravity can remain in a constant position to the Earth and the Moon. The other big problem is avoiding “boil-off” – the phenomenon in which fuel that’s not kept at cold-enough temperatures can boil away. If researchers can find acceptable solutions to these problems, then these outer space gas stations could be an efficient way to support large lunar explorations.

“One of the problems with large space programs is, you invest a huge amount in building up the infrastructure, and then a program gets canceled,” Hoffman says. “With depot architectures, you’re creating value which is robust against political uncertainty.”

Should this technique prove to be efficient, then it could also be applied in other situations, as humanity prepares itself for more and more space exploration.

“Currently, NASA is once again considering circumlunar human operations and developing architectures for moving on to Mars,” Head says. “So this paper is extremely important and timely in the context of developing NASA plans for human exploration beyond low Earth orbit.”