NASA’s Space Launch System will be the most powerful rocket humanity has ever built and 2020 onwards, it should make history as the craft that put man on Mars.

NASA’s Space Launch System will be the most powerful rocket humanity has ever built and 2020 onwards, it should make history as the craft that put man on Mars. Before this happens, though, the SNS has to pass a barrage of tests. Today, it was the rocket’s powerful booster that was under scrutiny, and all went as planned after it fired for a full two minutes at Orbital ATK’s test facilities in Promontory, Utah.

“This final qualification test of the booster system shows real progress in the development of the Space Launch System,” said William Gerstenmaier, associate administrator for the Human Exploration and Operations Mission Directorate at NASA Headquarters in Washington. “Seeing this test today, and experiencing the sound and feel of approximately 3.6 million pounds of thrust, helps us appreciate the progress we’re making to advance human exploration and open new frontiers for science and technology missions in deep space.”

Last year, SLS’s engine was tested which also passed with flying colours. But the booster is seen as one of the most critical, but also vulnerable parts of the rocket which is set to have two of them installed. Though these will only burn for a couple of minutes, these generate 75 percent of the thrust needed to launch SLS’s massive payload out of Earth’s atmosphere.

At the test site in Utah, the booster was essentially powered under the same conditions it should see on lift off, although it was grounded. The 17 stories-tall booster ate 5.5 tons of propellant per second to generate about 3.6 million pounds of maximum thrust. It must have taken some serious nut and bolting to keep this puppy from blasting off.

The next SLS’s boosters will fire is on its maiden flight scheduled for 2018. The so-called Exploration Mission-1 (EM-1) will launch an unmanned Orion crew capsule, but also various satellites and instruments including a lunar laser that will map the Moon’s poles. Manned missions could start as early as 2021, though 2023 is a more realistic target.

“Today’s test is the pinnacle of years of hard work by the NASA team, Orbital ATK and commercial partners across the country,” said John Honeycutt, SLS Program manager at NASA’s Marshall Space Flight Center in Huntsville, Alabama. “SLS hardware is currently in production for every part of the rocket. NASA also is making progress every day on Orion and the ground systems to support a launch from Kennedy Space Center in Florida. We’re on track to launch SLS on its first flight test with Orion and pave the way for a human presence in deep space.” 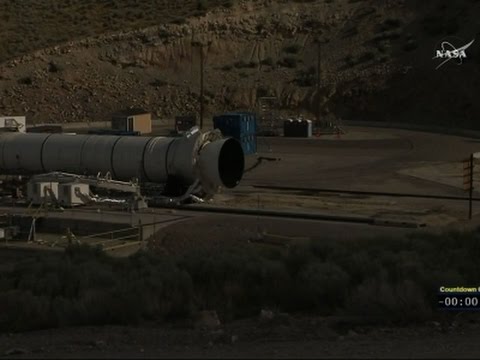