by Tibi Puiu
in Research, Space
A A

This is the kind of engineering feat that sounds so preposterous, so crazy, so … foolish, that it might actually work. A Japanese construction company plans to build an elevator that can lift tourists in space, up to a quarter the distance between Earth and the moon.

While entrepreneurs like Richard Branson or Paul Allen are busy planning exclusive private space flights for the rich, the Japanese are considering another alternative, which isn’t that down to earth at all. The said elevator would carry up to 30 people at a time, travel at 120 mph and take 7 days to reach its destination – 22,370 miles above Earth. I can only presume another 7 days are needed for descent. 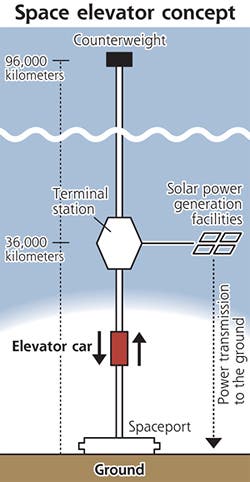 Obayashi Corp. has a solid portfolio of impressive skyscrapers under its belt, including, among others, Japan’s tallest building, the Tokyo Sky Tree. This isn’t some kind of fantasy, SciFi project – they actually want to make it work! The Tokyo-based company said its so-called space elevator could be ready in 40 years, if work on construction would being soon enough.

“Humans have long adored high towers,” said Satomi Katsuyama, the project’s leader. “Rather than building it from the earth, we will construct it from the space.”

The concept of a space elevator isn’t something new, either. The idea has been thrown around for more than 100 years now, before space flight was even conceivable. Sure, it was oddball enough to deem who ever proposed it legally insane, however in time many saw the practicability of such an exploit. Heavy cargo, usually transported in space by rockets, could be sent constantly and at a much lower cost, in the long run, using a space elevator.

The company claims that the project is realistically feasible, thanks to the introduction of carbon nanotubes in 1991, which are 20 times stronger than steel. Obayashi intends on stretching a carbon nanotube-made cable 60,000 miles into space, about a quarter of the distance between the Earth and the moon, where it would be jointed to a counterweight. At the other end, ground-side, would lie a spaceport where tourists will be able to embark on the elevator.

The elevator would climb tourists up to 22,370 miles up, where a terminal station will be located, complete with living quarters, while scientists and researchers could go all the way up to the tether. Magnetic linear motors would ensure a steady 125 mph ascending velocity, which would add up to 7 days of continuous climbing.

“We were inspired by construction of Sky Tree,” which will open for business in May, Katsuyama said. “Our experts on construction, climate, wind patterns, design, they say it’s possible.”

The Japanese news site, Daily Yomiuri, reports that the some other organizations have also been studying the development of space elevators, including NASA. The agency actually considered building an elevator leading from Earth to the Moon directly in the 1970s, but hey… it was the 70’s!

“At this moment, we cannot estimate the cost for the project,” an Obayashi official said. “However, we’ll try to make steady progress so that it won’t end just up as simply a dream.”