Just yesterday I was telling you about an extremely ambitious and admirable mission planned by the Russian, which has the purpose of extracting samples from Phobos, a moon of Mars. However, the mission seems to face some serious problems right after launch. 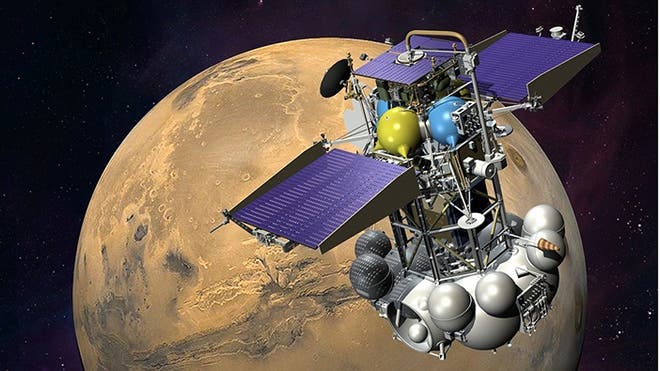 According to Russian officials, the probe is currently stuck in orbit and engineers have three days to solve this problem before its £105-million batteries run out. The probe successfully launched from the Baikonur Cosmodrome in Kazakhstan on 9 November (Moscow time), and separated from its Zenit-2 booster rocket some 11 minutes later. But immediately after that, everything took a turn for the worse, resulting in an engine failure.

The plan was for it to reach Mars, orbit it for a couple of months, then land on Phobos, where it would extract up to a few hundred grams of samples of dust and rocks. The mission was then supposed to heroically land in Russia, where it would be acclaimed and mark the start of a new era for Russian space flight, as well as end two decades of failed missions towards Mars.

That’s right, Russia seems to be suffering from a Mars: in 1988 Phobos 1 lost its way en-route to Mars after a faulty command sequence caused it to basically shut down. They tried again in ’96 with Mars 96, but the shuttle crashed into the shuttle immediately after launch. Phobos 2 managed to reach planet and even send a few pictures back, but engineers lost contact with the ship before it could land.

However, not all is lost, and there is a good chance engineers could fix the engine failure in the remaining three days; if this would happen, and nothing else would intervene, then the Grunt mission would reach Mars in September 2012 and resume plans as expected. Meanwhile, there’s going to be a couple of sleepless nights for engineers and astronomers in Russia.