In these past few decades, the US space program seemed to have significantly overcome the Russian one, with all sort of missions and studies, but more recently, the balance seems to have turned once again, as NASA is undergoing numerous problems, while the Russians are planning an ambitious mission which is aimed at the Mars moon Phobos. This will be their first interplanetary mission in over 15 years !

The Phobos-Grunt mission is set to blast off from Kazakhstan’s Baikonur cosmodrome at 3:16 p.m. EST today with the purpose of extracting and bringing back some samples from the red planet’s moon (‘grunt’ means ‘dirt’ in Russian). If successful, it would shed some new light on the early days of the planet, and give some indication about the mechanisms which take place on Phobos. Furthermore, it would be a great morale and image boost for the Russian space agency, which has surpassed the cone of shadow in which it lay for years.

“If Phobos-Grunt fully carries out its mission, then this will be a world-class achievement,” Igor Lisov, editor-in-chief of the journal Novosti Kosmonavtiki (Space News), told Agence France-Presse. “The problem with Russian space exploration has been that people have forgotten the taste of victory. The task of this mission is to restore confidence in our abilities and the importance of the task.” 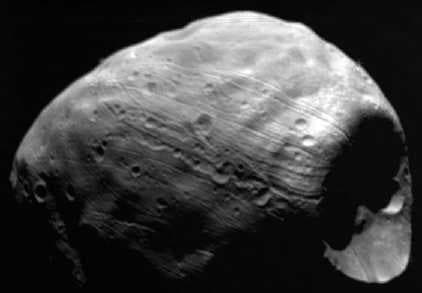 If everything goes according to plan, the $163 million mission will arive near Phobos in Autumn 2012, and drop its lander on the moon in the following months. The moon is most likely a potato shaped asteroid that was trapped by Mars’ gravity. After this, the lander will then return to the probe which will start its journey back to our planet, where it should arrive sometime in 2014, depending on the conditions and encountered problems.

Scientists are just boiling to get their hands on some samples; if it is indeed an asteroid, then it would be even more interesting, because these asteroids are leftovers from the solar system’s early days, primeval pieces that didn’t get absorbed by any planets. Also, some dust from Phobos could actually originate on Mars, from where it was brought as a result of a meteorite impact.

“This is really a very difficult project, if not the most difficult interplanetary one to date,” Phobos-Grunt lead scientist Alexander Zakharov told Reuters. “We haven’t had a successful interplanetary expedition for over 15 years. In that time, the people, the technology, everything has changed. It’s all new for us; in many ways, we are working from scratch.”