by Tibi Puiu
in Discoveries, Space
Reading Time: 2 mins read
A A
Share on FacebookShare on TwitterSubmit to Reddit 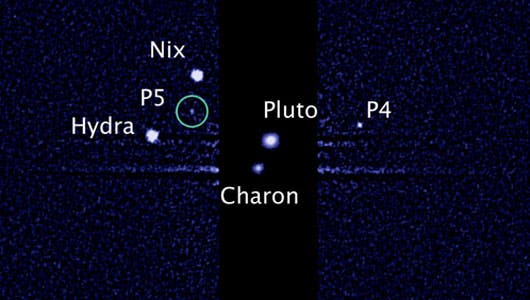 Astronomers have discovered a new moon orbiting the dwarf planet of Pluto – its fifth – only a year after the former planet’s forth satellite was discovered.

In the past decade alone, four out of Pluto’s five moons known thus far have been discovered. The latest addition, provisionally titled S/2012 (134340) 1 or P5, is only between 6 and 15 miles (10 to 24 kilometers) in diameter, orbiting a mere 29,000 miles (47,000 km) away from Pluto and posses an irregular shape. P5 is believed to have formed, like the rest of Pluto’s moons, after a large body in the Kuiper belt collided with the dwarf planet. Because of its tiny size, the moon retained an irregular shape, since its gravity was too small to shape it into a sphere.

Pluto’s other satellites are Charon, discovered in 1978, Nix and Hydra discovered in 2005, and P4 first sighted in 2011. Charon was first imaged by the United States Naval Observatory Flagstaff Station in Arizona, while the rest, including P5, were observed by the ever-resourceful Hubble Space Telescope.

The discovery is slated to spark concern over the expected fly-by around Pluto of NASA’s New Horizons spacecraft in 2015. The detection of P5, coupled with that of P4 last year, makes the surrounding area a lot more crowded than initially thought and warrants a re-trajectory if an unfortunate collision is to be 100% averted.

“We’re finding more and more, so our concern about hazards is going up,” New Horizons principal investigator Alan Stern, of the Southwest Research Institute in Boulder, Colo.

At this rate, there’s no telling how many more moons will be discovered in the future; people need to keep in mind that the Solar System is extremely vast. If the solar system were to be a truck, the sun, which is ~110 times the diameter of Earth across and can fit 1.3 million Earths in its volume, would represent a tiny dot on its surface. There’s still much to be discovered; much more.

What should we call P5?

The International Astronomical Union, which oversees the naming of celestial bodies, stipulates  that objects in Pluto’s vicinity must be named according to underworld mythology. Hence Pluto, Charon, Nix and Hydra. P4 and P5 have yet to be named. My picks would be Cerberus, Acheron or Tartarus.

Leave your suggestions for a name fit of Pluto’s new moon in the comment section below. This should be interesting.