What you see in this picture is two black spots on the sun, known as sunspots, which appeared quickly over the course of Feb. 19-20, 2013 and have grown quickly over the past couple of days. 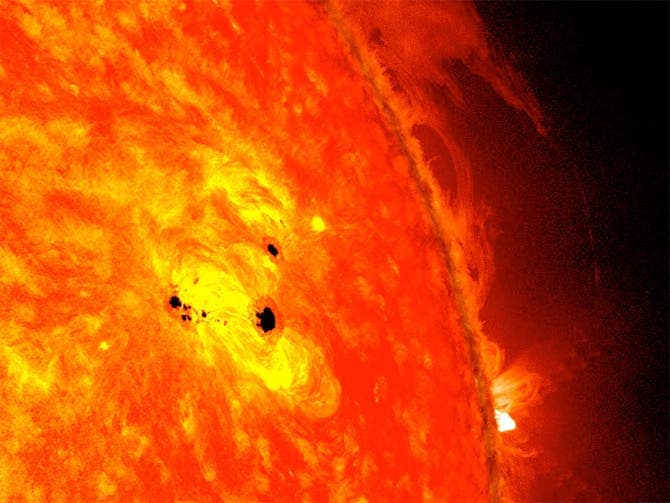 Sunspots are temporary phenomena on the Sun that appear visibly as dark spots compared to surrounding regions; they are caused by magnetic activity which inhibits the convection typically taking place in the Sun. Just like magnets, they have two poles.

In order to take this remarkable picture, NASA combined images from two instruments on NASA’s Solar Dynamics Observatory (SDO): the Helioseismic and Magnetic Imager (HMI), which just takes pictures in visible light and the Advanced Imaging Assembly (AIA), which took an image in the 304 Angstrom wavelength showing the lower atmosphere of the sun, which is colorized in red.

In the past two days, researchers have watched magnetic fields on the sun rearrange and realign, creating the sunspots which quickly grew to a diameter of ~6 Earths. They then evolved to what is called a delta region, in which the lighter areas around the sunspot, the penumbra, exhibit magnetic fields that point in the opposite direction of those fields in the center, dark area. This configuration is believed to be highly unstable, and can possibly lead to the creation of solar flares. So far, no official warming has been issued, but astronomers are keeping a close eye on the development.