by Tibi Puiu
in Astronomy, Remote sensing, Science, Space
Reading Time: 1 min read
A A
Share on FacebookShare on TwitterSubmit to Reddit 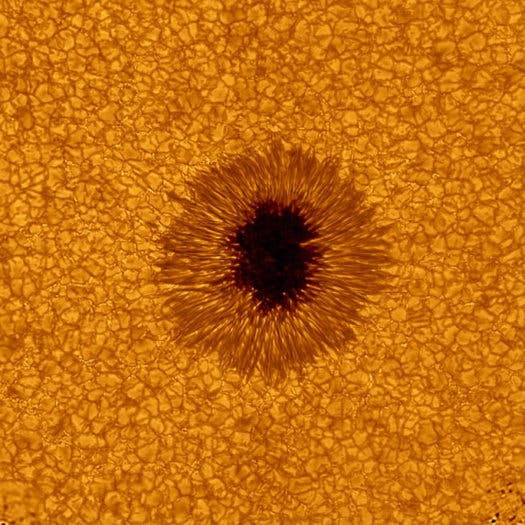 Now, that’s not Sauron’s eye. Pictured above is the most highly detailed photo of a sunspot ever taken at present date, captured and recently released by the Big Bear Solar Observatory, CA. The whole event was captured by Big Bear’s New Solar Telescope (NST), which has a resolution covering about 50 miles on the Sun’s surface.

“This photo of a sunspot is now the most detailed ever obtained in visible light,” according to Ciel et l’Espace.   In September, the popular astronomy magazine will publish several more photos of the Sun taken with BBSO’s new adaptive optics system.

Scientists believe magnetic structures like sunspots are very important to understanding space weather.  Space weather, which originates in the Sun, can have dire consequences on Earth’s climate and environment.  A serious solar storm can disrupt power grids and communication, destroy satellites and even expose airline pilots, crew and passengers to radiation.  The NST data will be fundamental for future research in the field.