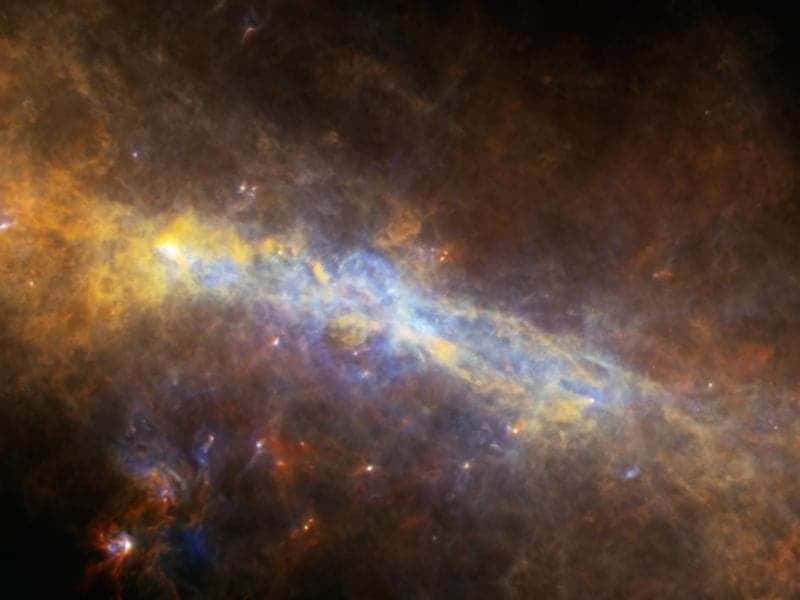 The Milky Way galaxy is just beginning to unveal its secrets to us, and we are just starting to understand how little we understand about it. Recently, new observations from the Herschel Space Observatory show a bizarre, twisted ring of dense gas at the center of our Milky Way galaxy. This strange ring stretches across 600 light years, and previously, only a few portions of it were known, and it was unclear how and if they are connected. The Herschel telescope reveals the entire ring for the first time; the most interesting portion is a kink that has researchers scratching their heads.

“We have looked at this region at the center of the Milky Way many times before in the infrared,” said Alberto Noriega-Crespo of NASA’s Infrared Processing and Analysis Center at the California Institute of Technology in Pasadena. “But when we looked at the high-resolution images using Herschel’s sub-millimeter wavelengths, the presence of a ring is quite clear.” Noriega-Crespo is co-author of a new paper on the ring published in a recent issue of Astrophysical Journal Letters.

When astronomers turned the Herschel telescope towards the ring, they were absolutely shocked with what they could see: the unprecedented tube of cold gas mixed with dust, where new stars are forming was shaped like an infinity symbol. It was shown later that the ring is in fact torqued in the middle, so it only appears to have two lobes.

“This is what is so exciting about launching a new space telescope like Herschel,” said Sergio Molinari of the Institute of Space Physics in Rome, Italy, lead author of the new paper. “We have a new and exciting mystery on our hands, right at the center of our own galaxy.”

The details of how this kind of ring appears are still not fully understood, but computer simulations demonstrate how gravitational interactions can produce the structures. Hopefully, these new observations will help shed some light on this phenomena.