NASA releases first ever topographic model of Mercury [the planet]

NASA just released the first ever topographic model of Mercury, the planet closest to the Sun.

NASA just released the first ever topographic model of Mercury, the planet closest to the Sun.

This is the first time a digital elevation model (DEM) has been released of Mercury. A DEM is a 3D representation of a terrain’s surface, usually for a planet, moon or an asteroid. The model was created thanks to NASA’s MESSENGER mission, which orbited Mercury from 2011 to 2015 and sent over 10 terabytes of Mercury science data, including nearly 300,000 images, millions of spectra, and numerous map products.

“The wealth of these data, greatly enhanced by the extension of MESSENGER’s primary one-year mission to more than four years, has already enabled and will continue to enable exciting scientific discoveries about Mercury for decades to come,” said Susan Ensor, a software engineer at The Johns Hopkins University Applied Physics Laboratory (APL), in Laurel, Maryland. For the last nine years, Ensor has managed the MESSENGER Science Operations Center, which oversees the collection of data.

The model revealed a trove of interesting facts about Mercury, including rather unexpected topographic features.  The highest elevation of Mercury is 2.78 miles (4.48 kilometers) above the average elevation of the planet while the lowest elevation is 3.34 miles (5.38 kilometers) below Mercury’s average, in the intriguing Rachmaninoff basin. Rachmaninoff is a peak-ring impact crater on Mercury believed to be the most recent volcanic feature.

The scale of Mercury’s volcanism is difficult to fathom.

“MESSENGER had previously discovered that past volcanic activity buried this portion of the planet beneath extensive lavas, more than a mile deep in some areas and covering a vast area equivalent to approximately 60 percent of the continental United States,” said APL’s Nancy Chabot, the Instrument Scientist for the Mercury Dual Imaging System (MDIS).

This was actually the most difficult part of Mercury to map. Because the area is near the planet’s North Pole, the Sun is always close to the horizon, which means that the area is always covered in shadows, obscuring many of the geological features and colors. In order to bypass this problem, Mercury’s imaging system used five different narrow-band color filters to minimize the effect of the shadows and reveal Mercury’s true colors, as seen above.

This is quickly becoming one of my favorite maps, and I’m not the only one.

“This has become one of my favorite maps of Mercury,” Chabot added. “Now that it is available, I’m looking forward to it being used to investigate this epic volcanic event that shaped Mercury’s surface.”

Although MESSENGER’s orbital operations have already ended for a year, astronomers and geologists are still analyzing the information it sent, outputting valuable information like this. Even more data is archived for future studies and reference, helping us better understand our planetary neighbors.

“During its four years of orbital observations, MESSENGER revealed the global characteristics of one of our closest planetary neighbors for the first time,” offered MESSENGER Principal Investigator Sean Solomon, Director of Columbia University’s Lamont-Doherty Earth Observatory. “MESSENGER’s scientists and engineers hope that data from the mission will continue to be utilized by the planetary science community for years to come, not only to study the nature of the innermost planet, but to address broader questions about the formation and evolution of the inner solar system more generally.”

You can view the model in the video below: 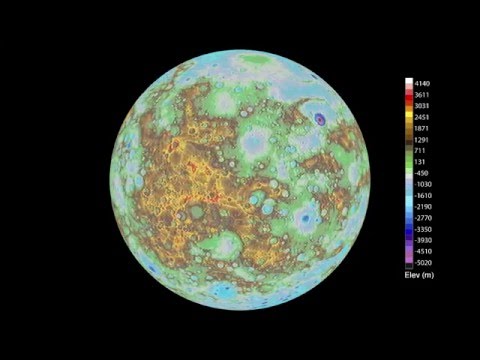