We were telling you a few days ago about a solar storm set to hit Earth, but as it turns out, this isn’t all bad news. In its way towards our planet, the storm also hit Mars, with the NASA Mars rover, revealing some interesting information regarding the amount of radiation an astronaut would be subject when on the Red Planet. 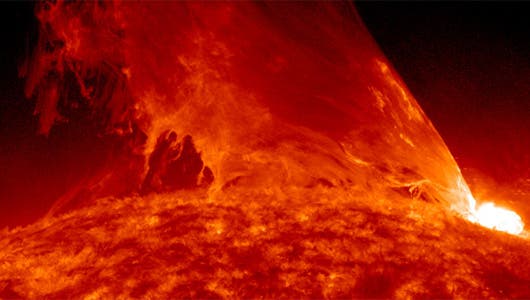 The largest solar storm since 2005 erupted from our star on Sunday, sending a cloud of charged particles towards Mars and the Earth (among others), affecting our planet’s aurorae, air travel, GPS satellites, but having no significant negative impact on Mars.

“We only have a few hours of data downloaded from the RAD so far, but we clearly see the event, said RAD Principal Investigator Don Hassler, science program director in the Space Studies Department at Southwest Research Institute. “This SPE encounter is particularly exciting in light of the alignment between the Earth, MSL and Mars right now and for the next few months. It will be very interesting to compare the RAD data, collected from inside the capsule, with the data from other spacecraft.”

“RAD was designed to characterize radiation levels on the surface of Mars, but an important secondary objective is measuring the radiation during the almost nine-month journey through interplanetary space to prepare for future human exploration,” said Hassler. “RAD is an important bridge between the science and exploration sides of NASA.

However, astrophysicists are really thrilled because this gives them the opportunity to study this radiation in unprecedented detail.

“Not only will this give us insight into the physics of these giant clouds, but like an astronaut, RAD is tucked inside the MSL ‘spacecraft,’” Hassler continued. “Measurements from RAD will give us insight about the shielding provided by spacecraft for future manned missions in deep space.”