Solar flare heading our way – to hit the Earth on Saturday 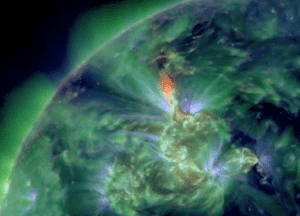 The sun recently shout out an M3.2-class solar flare in our direction, which scientists expect to hit the Earth this Saturday. The coronal mass ejection however is too weak to cause any havoc like doomsday fanatics might hope, just an incredible “fireworks” display as the charged particles hit the Earth’s magnetic field resulting in spectacular aurora borealis at the poles. Your toaster is safe, do no threat.

All the same, people in charge of power grids all over the world will be studying the event. In 2013 the sun will approach the end of its eleven year cycle, which is always followed by X-class solar flares, which might cause communication disruptions as they hit vulnerable satellites.

If you’re a northern resident and happen to catch a few great shots this Saturday, don’t hesitate to send some gems our way.