by Tibi Puiu
in Astrophysics, Space
A A

Using the incredible  Planck cosmology probe astronomers at the European Space Agency have assembled a map of the “oldest light” in the sky – the cosmic microwave background (CMB) that was thrown into space in all directions just a few hundred thousand years after the Big Bang and which is still picked up here on Earth today.

What’s exciting about the map is that it confirms the current fundamental “cosmological inception” theory – the Big Bang theory. However there are some features and ideas that need to be refined and rethought as a result of the findings. For instance, according tot the new Planck all-sky map, the Universe is  13.82 billion years or 50 million years older than previous estimates. Also, there seems to be more matter (31.7%) and slightly less “dark energy” (68.3%) – the mysterious force that drives the Universe apart and causes an accelerated expansion.

The trace the map, cosmologists studied the CMB – light that was allowed to escape after the early Universe cooled down to allow the formation of hydrogen atoms some 380,000 years ago. By studying temperature fluctuations of the CMB –  seen as mottling in the map – scientists can better assess their current theoretical models with actual data on anomalies, since these fluctuations are thought to actually  reflect the differences in the density of matter when the light first escaped. These ripples are thought to have given rise to today’s vast cosmic web of galaxy clusters and dark matter. 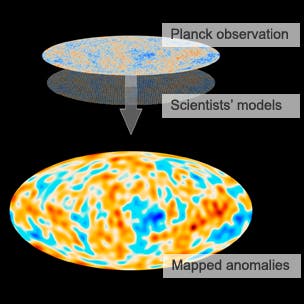 While some statistical analysis isn’t on par with data provided by the Planck map, cosmologists should rejoice as the news that their fundamental theories reflect reality. Especially those relating to the birth of the Universe, which is thought to have started as hot, dense state in an incredibly small space, and then expanded and cooled.

Other projects like the Cosmic Background Explorer and the Wilkinson Microwave Anisotropy Probe have provided earlier drafts of the “baby Universe”, however the map obtained from data gathered by the $900 million (€700 million) Planck probe launched in 2009 is the most detailed yet.

“The extraordinary quality of Planck’s portrait of the infant Universe allows us to peel back its layers to the very foundations, revealing that our blueprint of the cosmos is far from complete. Such discoveries were made possible by the unique technologies developed for that purpose by European industry,” says Jean-Jacques Dordain, ESA’s Director General.

“Since the release of Planck’s first all-sky image in 2010, we have been carefully extracting and analysing all of the foreground emissions that lie between us and the Universe’s first light, revealing the cosmic microwave background in the greatest detail yet,” adds George Efstathiou of the University of Cambridge, UK.

What also came as a surprise was a rather discrepant anomaly. Apparently, there’s an asymmetry in average temperature distribution across the Universe, as the southern sky hemisphere is slightly warmer than the north. Another significant anomaly is a cold spot in the map, centred on the constellation Eridanus, which is much bigger than would be predicted.

Nevertheless, cosmologists which have been dreaming about such a map for decades will now have their work cut out for them. Armed with this map, they now have the necessary resources or at least another tool at hand to prove or disprove some of the most controversial theories in cosmology today, like those discussing the rapid and far-reaching inflation of the Universe in its first moments from inception or the claim that there are six or seven spatial dimensions in addition to the three we perceive.