On Io, the floor is basically lava.

Using giant Earth-based telescopes in tandem with the movement of Jupiter’s moons, astronomers were able to peer inside a huge lava lake on Io. This is the largest lava lake in the solar system and interestingly it produces huge lava waves on its surface.

Io, the innermost of the four Galilean moons of the planet Jupiter, is the most volcanically active body in the solar system which explains Loki Patera, the huge lava lake in question. At 8,300 square miles, it’s like Lake Ontario, only made of a lava instead of water. Actually, because of tidal heating, most of Io’s crust is literally lava.

A simple glance of Io is enough to understand what I mean — hundreds and hundreds of outpouring of lava dot the moon’s surface. Some are short-lived eruptions, others are stable lava lakes like Loki Patera.

“If Loki Patera is a sea of lava, it encompasses an area more than a million times that of a typical lava lake on Earth,” said Katherine de Kleer, a UC Berkeley graduate student and the study’s lead author. “In this scenario, portions of cool crust sink, exposing the incandescent magma underneath and causing a brightening in the infrared.”

To study Loki Patera, scientists used high-end telescopes but also the help of a rare natural phenomenon. On the 8th of March, 2015, another of Jupiter’s moons — Europa — passed between Io and Earth blocking infrared radiation emanating from Loki Patera for a few moments. As Europa blocked extraneous light, researchers operating the Large Binocular Telescope were able to measure the temperature of different parts of the huge lava lake.

Previously, observations suggested that temperature on the surface of the lake fluctuated greatly, rising sharply every 500 days or so. These new observations help explain why this happens. Periodically, the very top layer of lava of the lake forms a crust, cools into a dense mass, then sinks flushing out and exposing hotter lava. Using data from the new measurements and knowing cooling rates of lava lakes found here on Earth, the team was able to not only figure out how hot the lava of Loki Patera is but also how old it is.

Apparently, the lava on the lake cools in two waves. One travels counterclockwise from the north part of the lake while the other travels clockwise. These waves of activity move slowly across the lake at a rate of about a kilometer/day. As the days go by, the waves will eventually offset despite starting at roughly the same time. According to Ashley Davies, one of the study’s authors, this may be due to the fact that there are two distinct sources of magma feeding each area of the lake. Each of these sources has a different composition of gas which ultimately makes the cooled crust sink at different rates, as reported in the journal Nature.

The video below shows a simulation of the two resurfacing waves sweeping around Loki Patera at different rates. 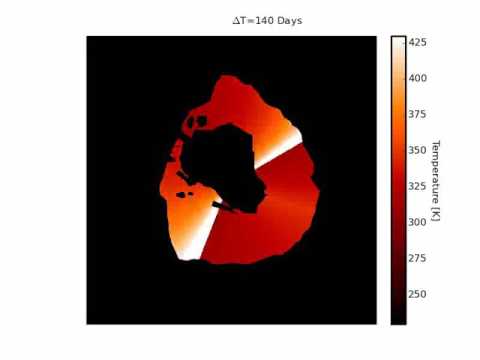 All of this very violent volcanic behavior is exciting for a number of reasons. Though 628 million kilometers away, Io is like a window into our own planet’s past. Earth, Mars, and Venus were all previously largely shaped and modified by eruption events that went on for millions of years. Let’s just say Earth had a very tumultuous youth.

Another important consideration is that the tidal heating that’s feeding Io’s surface with so much lava are similar to the same forces at work on Ganymede and Europa, Io’s neighbors. Not too long ago, NASA unveiled evidence of hydrogen molecules in the plumes gushing out of Europa’s surface — telltale signs of hot spots hidden beneath the moon’s icy crust which could support life. Who know what we might learn next when Europa blocks Ion again in 2021.

“This is a step forward in trying to understand volcanism on Io, which we have been observing for more than 15 years, and in particular the volcanic activity at Loki Patera,” said Imke de Pater, a UC Berkeley professor of astronomy.