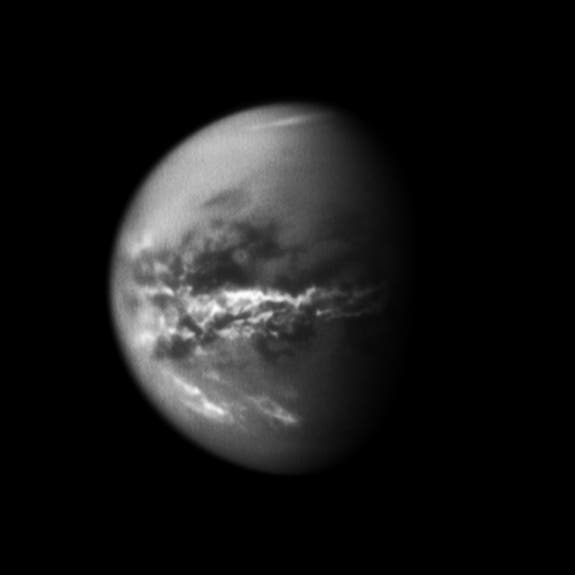 On Saturn’s largest moon, Titan, precipitations under the form of methane has scientists staggered. NASA’s Cassini spacecraft, through the use of its infrared camera, detected signs of heavy spring rain of the highly flammable liquefied natural gas sprinkling across vast fields of dunes near Titan’s equator.

“They see for the very first time evidence of rainfall at the equator of Titan,” said planetary meteorologist Tetsuya Tokano at the University of Koln in Germany, who studies the moon but wasn’t involved in the project.

As opposed to Earth, Titan’s cycles of precipitation, evaporation and cloud formation involve hydrocarbons such as methane and ethane. At its two poles, the moon features thousands of such hydrocarbon filled lakes, many as big as the ones you can find at the Great Lakes.

Using the Cassini probe, the scientists led by planetary geologist Elizabeth Turtle at Johns Hopkins University in Maryland compared images of Titan’s dunes between August 2009 and this past January. They realized there was a  sudden decreases in the brightness of the moon’s surface after clouds had swept over the region, and after a swift analysis they concluded that the ground there had darkened because it was wet.

“It may be a case of surface wetting,” Dr. Turtle said. “It wouldn’t take much. A millimeter of rain over this area would have done it.” Their research was published in Science.

Titan is one of the most fascinating space bodies in our solar system, mostly because it’s the only moon known to have a dense atmosphere capable of forming precipitation and because it has weather patterns resembling Earth. This latest study offers important insights regarding Titan’s climate.

The researchers’ observations may help explain the presence of dry river beds in Titan’s equatorial region. Scientists have been unsure if these channels formed during wetter climates in the past or from occasional methane storms that then dried out. 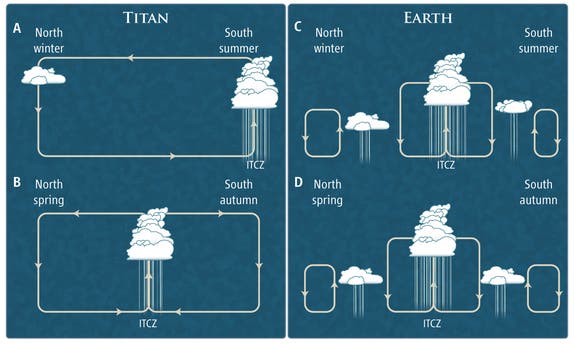 “Equatorial precipitation is likely to occur near equinoxes,” Tokano said. “The rain belt, while being intermittent, swings between the south and north pole, so every area on Titan could experience rainfall in the course of a Titan year.”

For the upcoming months up ahead, Turtle and his colleagues will be busy watching Titan for more climate change insights, particularly looking to see if the precipitation travels into Titan’s northern hemisphere, as predicted by atmospheric models.