Newly discovered comet set to light up the sky in 2013 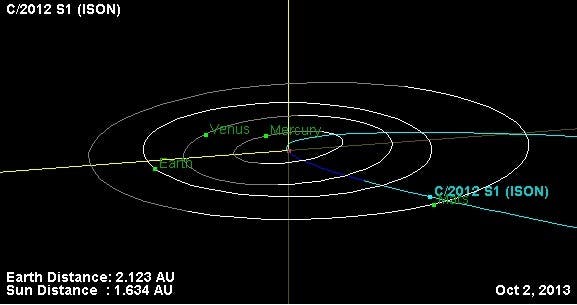 Discovered just last week by a Russian team at the International Scientific Optical Network (ISON), the comet C/2012 S1 (ISON) is set to flyby less than two million miles away from the sun, unleashing a spectacle of light in the process at the end of 2013. Astronomers estimate, if it doesn’t desintegrate, that the comet will be easily visible with the naked eye for two months, day or night. It would actually be brighter than a full moon.

“According to its orbit, this comet might become a naked-eye object in the period November 2013 – January 2014. And it might reach a negative magnitude at the end of November 2013,” reads the report.

Currently, the comet is near Jupiter about 6.6 astronomical units (AU) of the sun, and is set to come within 0.012 astronomical units (AU) of the sun, or just 1.1 million miles, at the perihelion by November 28, 2013. Astronomers believe it should become fairly visible to the naked eye from March 9, 2013 onwards when it’s projected to come within 45 million kilometers (28 million miles) of the Sun. At this distance, ice in its composition should start to vaporize and release a bright coma and tail, that characterize comets in popular view.

The comet is at its first approach to the sun, and originates from the Orrt cloud, from which many comets emanate. However, astronomers fear that it might succumb to the some fate as last year’s Elenin comet, which completely boiled off. The discovery was made by Vitali Nevski, of Vitebsk, Belarus, and Artyom Novichonok, of Kondopoga, Russia with a 0.4-meter reflecting telescope near Kislovodsk, Russia.