by Tibi Puiu
in Space, Space flight
Reading Time: 3 mins read
A A
Share on FacebookShare on TwitterSubmit to Reddit

India is a sort of economic paradox. Its general population is among the poorest in the world, yet it is still wealthy in many respects. It wouldn’t be a mistake to call India a space superpower, at least in the way the term gets tossed in the press. Attesting this fact is the country’s recently successful launch of its  Mars Orbiter Mission (MOM) set for a 300 days travel towards the red planet. This is the culmination of the country’s 50 year-long space program.

If successful, meaning if MON reaches Mars orbit, this would make India the fourth space program to achieve this feat, after US, Russia and Europe. As a fuel-saving alternative, the spacecraft will circle Earth in an elliptical orbit for nearly a month, building up the necessary velocity to break free from our planet’s gravitational pull and then continue its 780-million km journey.

The MOM, or informally known as   Mangalyaan, weighs only 15 kgs and is equipped with instruments intended to probe Mars atmosphere. It’s main mission is that of  tracking CH4 (methane) signatures in the Martian atmosphere, a gas whose signal was detected in past  from Martian orbit and telescopes on Earth, but which couldn’t be detected from the ground by NASA’s Curiosity Rover. Methane is of great interest to scientists since it hits at life. For instance, 95% of the atmospheric methane on Earth is produce by microorganisms. Also, India’s MOM would offer valuable scientific contributions by examining  the rate of loss of atmospheric gases to outer space. Data like this will help scientists probe deeper into Mars’ geological past. 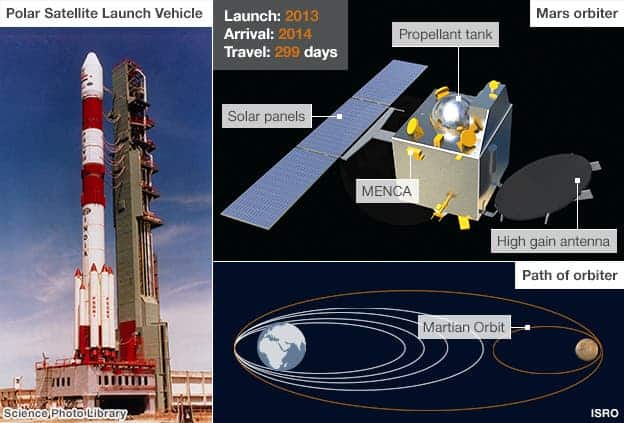 At $72 million, MOM is the cheapest space mission of the sorts so far, yet in the context of a country battling corruption, malnutrition and poverty some might find it odd that India still has time to ‘play games’. The same could be said about any country, however. Exploratory missions such as these offer no immediate practical outcome (yes, space tech has moved to civilian tech with great contributions i.e. solar panels, but let’s leave this aside for a moment), but shouldn’t mankind focus on long-term goals as well like inter-planetary exploration? It’s quite possible the farther we stray away from our planet and learn more about what lies without, the more we may learn about what lies within. With this in mind, any contribution is most welcomed and India is more than happy to play its part. At least this is what I like to believe – there are of course numerous other factors at play including politics (this is a strong signal sent to other countries showing what India is capable of, especially looking at other Asian powers like China. It’s worth noting in 2012 India developed ICBM capabilities) and national pride.

Nisha Agrawal, chief executive of Oxfam in India, told the BBC: “India is home to poor people but it’s also an emerging economy, it’s a middle-income country, it’s a member of the G20. What is hard for people to get their head around is that we are home to poverty but also a global power.

“We are not really one country but two in one. And we need to do both things: contribute to global knowledge as well as take care of poor people at home.”

K Radhakrishnan, chair of the Indian Space Research Organisation (Isro), told the BBC’s India Business Report: “Why India has to be in the space programme is a question that has been asked over the last 50 years. The answer then, now and in the future will be: ‘It is for finding solutions to the problems of man and society.’

He added: “A great revolution has taken place over these last 50 years in the country by a meagre expenditure that has been put into the space programme.”