Herschel reveals the hidden side of star birth

The first touchable scientific results of the Herschel infrared space observatory are spectacular indeed; not only is it showing previously hidden details of star formation, but it also shows thousands of distant galaxies “building” stars with incredible energy and covering the Milky Way in wonderfully coloured star clouds. 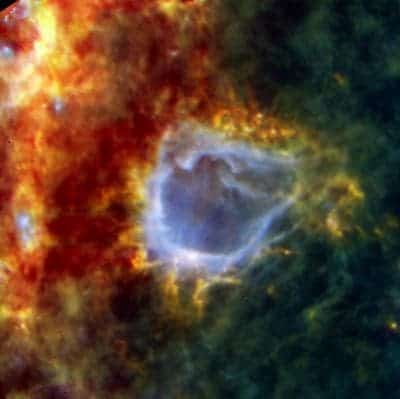 Not only are the images spectacular by any standards, but they also raise new questions regarding star birth. For example, The star in the image above is more than 8 times bigger than the Sun and it promises to become one of the most active ones in our galaxy for hundreds of thousands of years to come. However, according to our current understanding, this star shouldn’t exist.

“This star can only grow bigger,” says Annie Zavagno, Laboratoire d’Astrophysique de Marseille. Massive stars are rare and short-lived. To catch one during formation presents a golden opportunity to solve a long-standing paradox in astronomy. “According to our current understanding, you should not be able to form stars larger than eight solar masses,” says Dr Zavagno.

We’ll keep an eye out for future updates from Herschel.

“These are still early days for Herschel and this is just the beginning of all the science that we will get from this mission in the years to come,” says Göran Pilbratt, ESA Herschel Project Scientist.