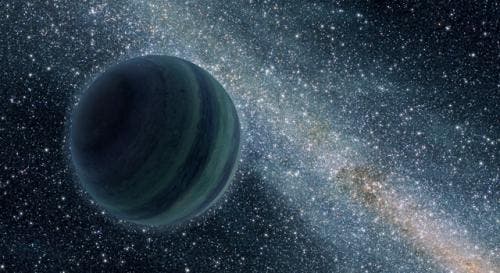 Finding new planets is interesting an remarkable, but finding a whole new class of planets – that’s definitely something extraordinary. University of Notre Dame astronomer David Bennett described just that – a class of planets without stars or a solar system, just wandering around the galaxy all by themselves.

The most likely theory is that these planets were ejected during the formation of solar systems; they found ten planets, all of which resemble Jupiter.

“Our results suggest that planetary systems often become unstable, with planets being kicked out from their places of birth by close encounters with other planets”.

What’s interesting about this discovery is that it indicates not only that there are huge planets just wandering about in space, but that there are quite many. Free floating planets are extremely hard to detect, so the fact that they found ten points towards many more starless planets. Also, it doesn’t indicate that it’s all about Jupiter-like ones.

“Our survey is like a population census — we sampled a portion of the galaxy and, based on these data, can estimate overall numbers in the galaxy,” Bennett said. “The survey is not sensitive to planets less massive than Jupiter and Saturn, but theories suggest that lower-mass planets like Earth should be ejected from their stars more often and are thus more common that free-floating Jupiters.”

Some researchers went extremely far, suggesting that these planets might actually harbor life, even without a star, due to an very powerful greenhouse effect caused by the enormous amounts of hydrogen in their atmosphere. NASA’s planned WFIRST mission will use the microlensing method to reveal how many free-floating Earth-mass planets inhabit the Milky Way galaxy.