Earth on the night shift: a incredible view from space [VIDEOS]

by Tibi Puiu
in Feature Post, Space, Videos
A A 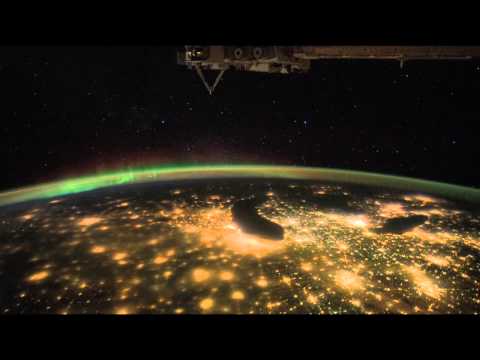 Night is quick to sound the alarm for most of us that it’s time to hit he sack. While you’re peacefully sleeping and dreaming away, up stairs things are a bit different. For the brave men and women stationed at the International Space Station there is no night or day, and considering the station orbits the Earth 15/16 times a day, they can basically see the  Earth in both situations whenever they feel like it. Oh, and the things an astronaut sees from space. We’ve showed you a few incredible sights captured by the ISS in the past, but these latest documented footage from NASA is simply stunning!

Taken between Jan. 29-Feb. 3, the images show a continent ablaze with light, from the electric glow of hundreds of cities to a spectacular aurora borealis flickering on the northern horizon. The videos released includes flights over Mexico towards the East Coast, or from Texas to the Great Lakes, and above the St. Lawrence Seaway. There’s also one that offers a view that begins from the West Coast and continues across the Great Plains.

The imagery was taken using a still camera aboard the station, orbiting 240 miles above Earth, most of them taken at one frame per second and then pieced together to better resemble the true speed of the station in orbit.