Curiosity’s “history books” find is all a big misunderstanding 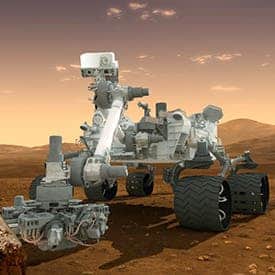 Last week we were all filled with enthusiasm at sight of recent rumors that had Curiosity on the brink of a monumental find worthy of “history books”, no less. Since a soil sample was being analyzed at the moment, people began speculating that something organic in nature may have been found. I personally didn’t have my hope up, although I might have stirred up a few readers, and if they’re finding themselves disappointed right now, I apologize.  Why? Because NASA officials stepped up to clarify the rumors, and dismissed any such claims. It was all a misunderstanding according to Veronica McGregor, NASA’s news and social media manager.

It all started when Curiosity principal investigator John Grotzinger told NPR that “this data is gonna be one for the history books” and that “it’s looking really good”. Coincidentally, these remarks were launched while Grotinger’s team was hard at work analyzing newly received data from martian soil sample analysis. The journalists most likely correlated the two events and …well, you know the rest.

What did I discover on Mars? That rumors spread fast online. My team considers this whole mission “one for the history books” … reads a recent tweet from the official Curiosity account.

So you see the statement concerned the whole Curiosity mission as whole, not a particular discovery. I know, this bears all the characteristics of a bad joke.

“It’s always difficult to quell rumors like this one. But at the same time it’s great to see so many people are excited and interested in what the rover might find,” McGregor told Mashable.

On another note, NASA has a press conference slated for Dec. 3 at the American Geophysical Union (AGU) meeting, where actual Curiosity findings will be presented.