The moment is finally here – first samples analyzed by Curiosity

It’s dinner time, and you know what there’s on the menu? Rocks! Martian rocks, to be more precise. 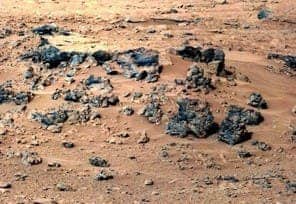 After what seemed at times to be an excruciating series of baby steps, the rover has finally managed to extract the first samples and place it in CheMin – one of the two miniature laboratories located inside Curiosity. It’s been a long time coming, but the patience was rewarded, as despite the dramatic land (nicknamed the ‘seven minutes of terror’ by NASA engineers), the Martian tests and every other engineering and scientific challenge, everything went according to plan!

“What’s really exciting about this sample that just got dumped into CheMin” and later will be scrutinized by a second lab package on the rover “is that they are going to be able to analyze once and for all the mineral composition” of this material “that swirls around the planet,” says John Grotzinger, a planetary geologist at the California Institute of Technology in Pasadena and the Mars Science Laboratory’s project scientist.

This is the first test of CheMin’s ability to uncover which elements lie in the Martian soil, and it in fact check to see if Mars had any life in its distant past – don’t get your hopes up though, researchers are hoping only for microbial life.

So far, the rover is still analyzing the samples, but the results will be available in a short time – so stay tuned, we’ll keep you posted with any development.