Can you be prosecuted if you commit a crime on the moon?

Well, technically if you're not a space pirate, you'll be prosecuted by the laws governing your home country. On the International Space Station, that's another story.

by Tibi Puiu
in News, Space, Videos
A A

If you commit a crime in a country, you’ll be prosecuted by the laws of the said country. One gray area that had to be settled by law makers was prosecution in territories that no one owned. If you dock a ship in a port in Miami, you will be held liable under civil law in the United States. In the high seas or international waters which start 12 to 24 miles from the coast, that’s another story. A ship flies the flag of the country where it’s registered, and, in general, the laws onboard a ship are the laws of that country.  So, a Liberia-registered cruise ship that’s 25 miles off the coast of California isn’t subject to U.S. law; it’s subject to Liberian law. If you renounce your citizenship, build your own boat and sail to high seas, then you’re technically a pirate. This certainly doesn’t mean that you’re allowed to do anything. On the contrary, you’re at the whim of whomever you come across: you could be killed and the killer wouldn’t be prosecuted (if he kills you in your pirate ship).

As technology advances, law and policy makers had to adapt. When ships were invented, laws were made to govern their passage. Same with aircraft (airspace law) and later space. Space law is a very touchy subject nowadays, because the first space laws drafted in the Outer Space Treaty (1967) did not take into account modern opportunities: mining asteroids and the moon or colonizing other planets. Things are already getting tensed after last year the U.S. Congress passed a ridiculous law that says U.S. citizens are now entitled to any resources they mine off the moon, asteroid or any celestial body outside Earth.

With this in mind, some might think that committing what most people (and the law) regard as crimes here on Earth is of no legal repercussion on the moon or outer space. Wrong! The principle of ‘extraterritorial jurisdiction’ applies, where someone is bound by the laws of the country from which they originate if they are not presently in another country (no man’s land). So, if you’re an 18-year-old Brit having a pint on the moon it’s perfectly fine and legal, but not if you’re an U.S. citizen of the same age — that would be illegal. Aboard a space ship or the International Space Station, the same laws as those governing international waters mentioned earlier apply. Confusing? Check out this entertaining video below produced by Wendover Productions, which explains it all quite illustrative. 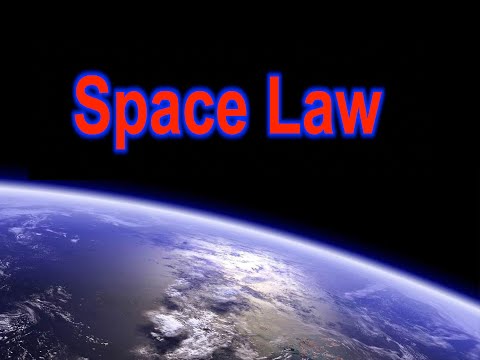