by Tibi Puiu
in Other, Space 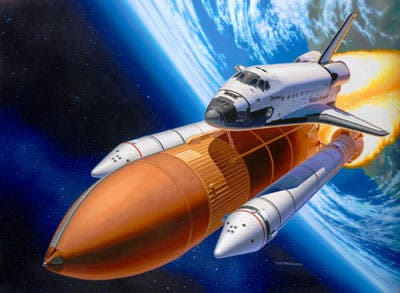 The shuttle program however will be permanently retired soon, with only two more flights left – shuttles Endeavour and Atlantis. Discovery, which completed its final journey to the International Space Station last month, and Enterprise, the first shuttle, which took its maiden voyage in 1977 but was a test orbiter and not capable of spaceflight, have been already retired.

All four shuttles will be symbolically donated to four worthy institutions for displaying purposes, with the official announcement settling the resting place for each shuttle going live this Tuesday. Currently there 27 institutions across the US competing to have one of the shuttles on permanent display, among which Houston’s NASA Mission Control or Florida’s Kennedy Space Center. I’m pretty sure one of the two will have a shuttle on display somewhere, it would be most fitting, really. Other institutions  that would love to host a space shuttle are the  Johnson Space Center, the Air Force Museum in Ohio and museums in New York City, Seattle and Chicago.

Apparently, Shuttle Discovery, which ended its flying career last month, is going to the Smithsonian Institution in Washington.

We’ll keep this post updated as soon as the remaining three institutions each hosting a shuttle for permanent display are officially announced. Be sure to return to this page, if you’re still curious.