A group of scientists and engineers from the United Kingdom are working on an ambitious program to revive their only satellite – still in orbit after 40 years. 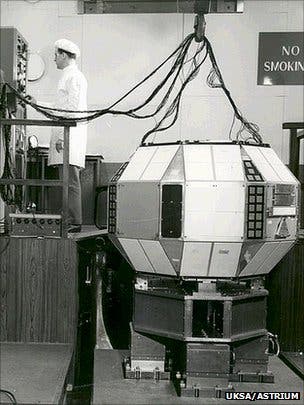 When the Prospero spacecraft was launched atop a Black Arrow rocket on 28 October 1971, it was pretty much the end of an era; the end of a really short era that is. Prospero was the first, and until now, the last satellite launched into outer space by the British. The program was already canceled, but since everything was ready and set up, they decided to launch it anyway.

However, it operated successfully only until 1973, but was contacted anually until 1996. Nothing was ever done until now, when a team led by PhD student Roger Duthie from University College London’s Mullard Space Science Laboratory in Surrey started reestablishing communications in time for the satellite’s 40th anniversary.

“First, we have to re-engineer the ground segment from knowledge lost, then test the communications to see if it’s still alive,” Duthie told the Space Boffins podcast. “Then we can have drinks and champagne!”

But this is no easy task (except for the drinks); so much time has passed since the satellite was up and running that the codes to contact Prospero were missing – which makes the entire affair much more difficult and complicated.

“The technical reports made in the 1970s were thought to have been lost,” explained Duthie. “We talked to the people involved in Prospero, searched through dusty boxes in attics and tried the library at Farnborough.”

But they finally discovered the codes in the National Archives at Kew, London. However, even with these codes, the engineers will have a hard time building a device that can ‘talk’ to the satellite and win approval from the broadcast regulator Ofcom to use Prospero’s radio frequencies – these days being employed by other satellite operators. But they seem adamant to doing it.

“It’s an artefact of British engineering; we should find out how it’s performing,” said Duthie.

If it works, Duthie’s team can call themselves the world’s first astro-archaeologists.