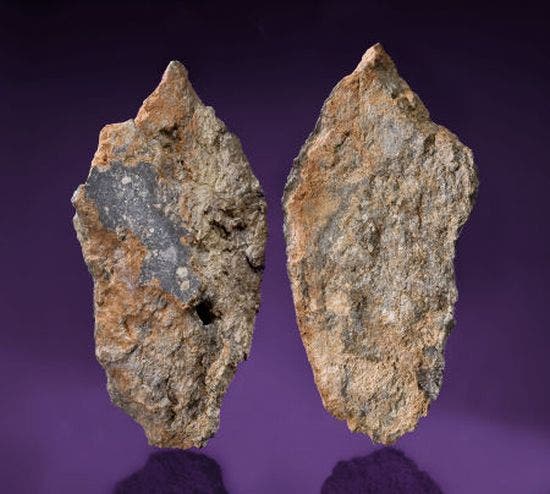 This four pound geological marvel, captioned above, is what’s commonly reffered to as a lunar meteorite. And like all things of rarity, it’s been recently listed for auction – the biggest chunk of moon rock yet. Experts believe it should sell around the $380,000 mark.

Lunar meteorites are a special class of moon rocks. During meteorite collisions with the moon’s surface, which happen quite often given its  cheesy aesthetic, inevitably some chunks of rocks get blown off and enter Earth’s atmosphere due to the weak gravity on our natural satellite. The rocks big enough to survive atmospheric entry end up on Earth’s surface.

So far, a mere 100 pounds of lunar meteorites have been found, most of which in Antarctica and North Africa. Concerning the slab-shape moon rock in question, dubbed Dar al Gani 1058, experts believe it originated as a piece of lunar highland breccias from the moon’s far side. It was discovered in Libya in 1998, according to the Meteoritical Society, and was put up for auction by an anonymous collector.

The auction is set to end on October 14, and opening bids start $170,000. That may seem like much, but collectors have paid far more for far less. It’s worth considering however, that lunar rocks which end up on Earth due to natural conditions, pale in worth to those gathered during lunar missions. In fact, the 800 pounds or so of lunar rocks gathered so far from the moon from missions like the Appollo are considered invaluable and national treasures by the world’s governments.

Hand-picked moon rocks have never been awarded to individuals, and are considered completely off limits to civilians. Actually, I remember writing last year about a granny who was seized by armed government officials after auctioning a spec of lunar dust the size of a grain of rice for $1.7 million; aside from the fact that officials were a bit overzealous and the uncertainty of how exactly a 74-year-old got ahold of such an artefact, it gives to show that lunar meteorites are virtually your single best shot at owning a piece of the lunar pie.