Super-dense celestial bodies may be new types of planet

Despite all the magnificent advancements in the field, we are still in the infancy of our research on extraterrestrial planets, so it shouldn’t really surprise anybody if a new type of planet is found. 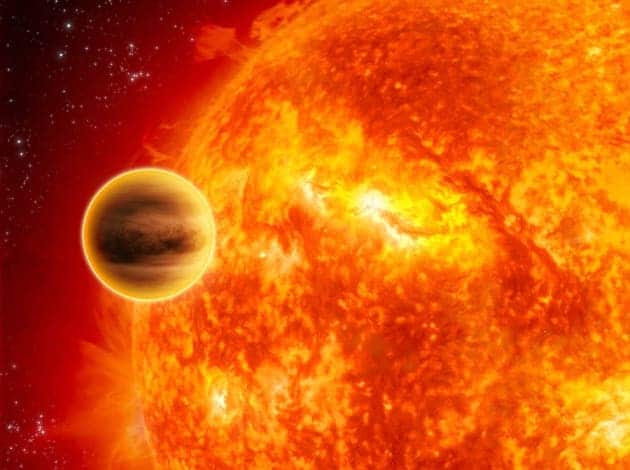 Mysterious dense bodies outside the Solar System which have puzzled astronomers for quite a while may in fact be remnants of Neptune-like planets which went too close to their Sun and got compressed.

NASA’s Kepler space mission to find exoplanets, which launched in 2009 found bodies which appeared to be simply too heavy for their size – the planets in case have radiuses similar to Earth’s, but are denser than pure iron. No conventional planet forming theory can explain this.

“There is no way to explain that in the Solar System,” says Olivier Grasset, a geophysicist at the University of Nantes in France.

Grasset and his team put forth an interesting theory which claims that these planets are actually fossil remains of much larger bodies, which were stripped of their outer, frozen crust – leaving us today with the fossil core.

If these planets were formed far from their stars, but in time, migrated closer to their star – possibly as cloe as Mercury is today, then the hot temperatures of the star would evaporate the outer layers of the planet, which are made mostly from volatile elements (hydrogen, helium and water). The only thing that would remain would be the core (consisting of rock and metal, just like Earth’s) – which is very dense, because during its initial stage (before the outer layers were evaporated) it was formed at about 5 million times atmospheric pressure on Earth and temperatures of approximately 6000 Celsius degrees.

Lars Stixrude, a geologist at University College London, calls the idea “fascinating”, but he does mention that we still don’t understand the behaviour of materials under the extreme temperatures and pressures of an ice-giant core is still incomplete. William Borucki, a space scientist at NASA’s Ames Research Center in Moffett Field, California, and leader of the Kepler mission adds that the theory is plausible, but there are plenty of other ways through which the outer layers could be blasted away. The process could be the result of a cataclysmic collision with another planet-sized object, for example. Either way, the Kepler mission is definitely updating how we understand the Universe we live in.

“This is why we do science.”, Borucki says.