Oceans of diamonds on Uranus

by Mihai Andrei
in Physics, Space

A new research published in Nature Physics showed that there may be oceans of diamonds (literally) on both Uranus and Neptune. The first ever study conducted on the melting point of diamond concluded that at that certain point, it behaves just like water, with the solid form floating in the liquid form (just imagine icebergs, or small chunks of ice floating in a puddle). 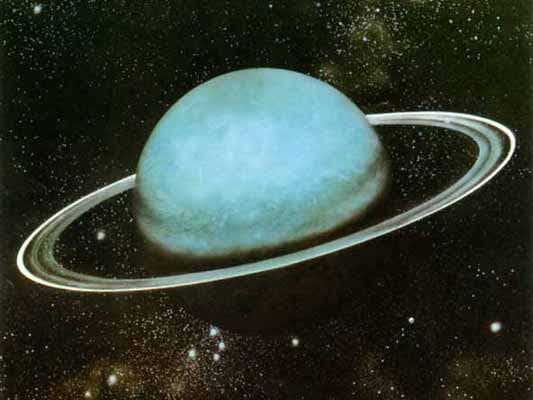 “Diamond is a relatively common material on Earth, but its melting point has never been measured,” said Jon Eggert (Lawrence Livermore National Laboratory). “You can’t just raise the temperature and have it melt, you have to also go to high pressures, which makes it very difficult to measure the temperature.”

This in itself made the measuring point difficult to find out; diamond doesn’t like to stay diamond when it’s really hot – it tends to turn to graphite (still Carbon, but different crystal properties), which then melts, so the challenge was to find out diamond’s melting point without turning into graphite, which is why they also had to apply pressure.

Now, about Uranus and Neptune. The thing with the two planets is they both have an anomaly; their geographical and magnetic poles have nothing to do with one another, so researchers concluded there has to be an anomaly responsible for the 60 degree deviation of the poles of the North-South axis; on a sidenote: Earth’s poles oscilate too. They even switch polarities, in a very slow and gradual process. They don’t follow the N-S axis, but rather a complicated curve, however, without deviating too much from it (just how much is still debatable).

So what could cause this huge deviation? According to researchers performing the study, it’s extremely likely an… ocean of diamonds. They constructed models which showed the same results and this would also fit with the planet’s chemical composition (over 10% carbon), so this seems more and more plausible. If this is indeed the case, Uranus is definitely Marilyn Monroe’s heaven.

EDIT: before any of you start with the boyish jokes… just don’t do it :)