A lost moon of Neptune has not been seen since its discovery in the late 1980s – until now, that is. 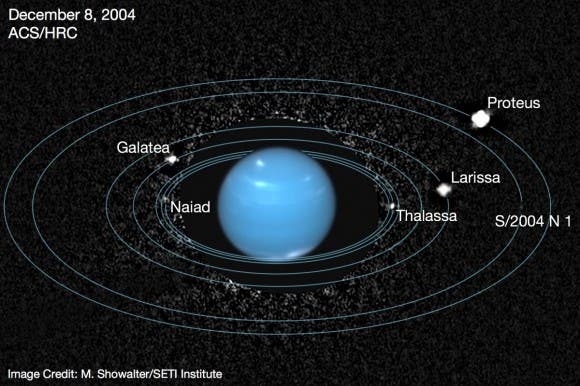 A new announcement from the 45th Meeting of the Division for Planetary Sciences of the American Astronomical Society revealed the rediscovery of the moon of Neptune which was only glimpsed briefly back in the 1989 flyby of Voyager 2.

Naiad, the innermost moon of Neptune, was spotted by the SETI institute – in case you’re wondering what alien intelligence has to do with Neptune’s moons, SETI is studying the long-term dynamics of many-moon and ring systems, which is very important for the viability of life on moons in systems like that.

“Naiad has been an elusive target ever since Voyager left the Neptune system,” Showalter said in a recent SETI Institute press release. Voyager 2 has, to date, been the only mission to explore Uranus and Neptune.

As it seems to happen more and more lately, the discovery came as a result of new techniques applied to old images. Showalter and his team applied new analyzing techniques which filtered for glare and image artifacts that tend to “spill over” from Neptune. A few of Neptune’s other moons (Galatea and Thalassa) were also found in these images, as was an entirely new moon (S/2004 N1) which was revealed earlier this year.

The orbit of the moon was pretty surprising, as it was discovered in an entirely different position than was expected – probably as a result of interactiosn with Neptune’s other moons.

“We don’t quite have enough observations to establish a refined orbit,” Mr. Showalter told Universe Today, noting that there may still be some tantalizing clues waiting to be uncovered from the data.

In Greek mythology, Naiads are a type of nymphs in charge over fountains, wells, springs, streams, brooks and other bodies of freshwater (distinct from river gods).