by Mihai Andrei
in Astronomy, Astrophysics
Reading Time: 4 mins read
A A
Share on FacebookShare on TwitterSubmit to Reddit

Researchers have for the first time conducted a remote reconnaissance of a distant planetary system with a new telescope imaging system.

Peeking at other planets 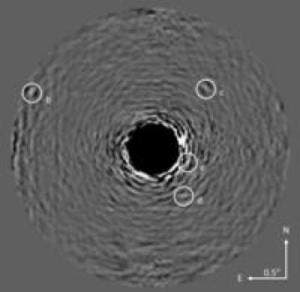 Project 1640 is a dedicated high contrast imaging program at Palomar Observatory with the goal of obtaining images and spectra of brown dwarfs and planetary mass companions to nearby stars. The solar system they analyzed is 128 light years away, and has four red exoplanets; a detailed description of the planets was published in the Astrophysical Journal, showing what an unbelievable diversity of planets our galaxy hosts.

“An image is worth a thousand words, but a spectrum is worth a million,” said lead author Ben R. Oppenheimer, associate curator and chair of the Astrophysics Department at the American Museum of Natural History. 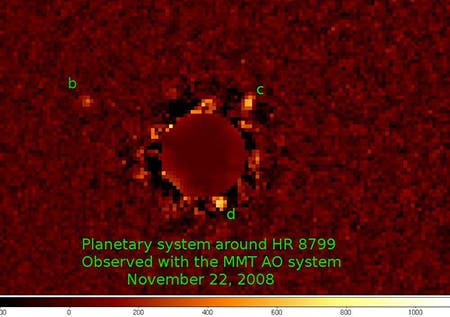 Oppenheimer is the main investigator working on the project. He explained that the planets orbiting the star in case, but until now, the star’s bright light overwhelmed previous attempts to study the planets with spectroscopy. Simplistically put, spectroscopy studies how white light is split into its constituent wavelenghts, much like when it passes through a prism; it’s very useful in such studies, because every chemical element has its unique spectroscopic signature, and if the conditions allow it to be applied properly, the technique can reveal the chemical composition of a planet’s atmosphere.

“In the 19th century it was thought impossible to know the composition of stars, but the invention of astronomical spectroscopy has revealed detailed information about nearby stars and distant galaxies,” said Charles Beichman, executive director of the NASA Exoplanet Science Institute at the California Institute of Technology. “Now, with Project 1640, we are beginning to turn this tool to the investigation of neighboring exoplanets to learn about the composition, temperature, and other characteristics of their atmospheres.”

With this new system, the conditions were just right, allowing a fantastic observation of the planets orbiting HR 8799.

“It’s fantastic to nab the spectra of four planets in a single observation,” said co-author Gautam Vasisht, an astronomer at the Jet Propulsion Laboratory.

The results were very strange – unlike anything astronomers were prepared for.

“These warm, red planets are unlike any other known object in our universe. All four planets have different spectra, and all four are peculiar. The theorists have a lot of work to do now.”

The first anomaly that strikes the eye is the apparent chemical imbalance. From what we know of basic chemistry, ammonia and methane should naturally coexist in varying quantities unless they are in extremely cold or hot environments. However, at temperatures just over 700 degrees Celsius (1340 degrees Fahrenheit), which are “lukewarm” by astronomic standards, all the planets either have methane or ammonia, with little or no signs of their chemical partners.

The planets are also surprisingly red – emitting longer wavelengths of light, than celestial objects with similar temperatures. The most likely explanation for this phenomena is a patchy cloud covering all the planets.

“The spectra of these four worlds clearly show that they are far too toxic and hot to sustain life as we know it,” said co-author Ian Parry, a senior lecturer at the Institute of Astronomy, Cambridge University. “But the really exciting thing is that one day, the techniques we’ve developed will give us our first secure evidence of the existence of life on a planet outside our solar system.”

Aside from the unquestionable value of this particular study, the system has proven its worth and now, researchers will definitely want to take a glance at other solar systems, perhaps some which are more likely to harbor life.

“Astronomers are now able to monitor cloudy skies on extrasolar planets, and for the first time, they have made such observations for four planets at once,” said Maria Womack, program director for the Division of Astronomical Sciences at the National Science Foundation. “This new ability enables astronomers to now make comparisons as they track the atmospheres, and maybe even weather patterns, on the planets.”

The fact that all these planets were different also shows that the technique works in a number of environments, bringing even more hope to the table.

“The variation in the spectra of the four planets is really intriguing,” said Didier Saumon, an astronomer at Los Alamos National Laboratory who was not involved in this study. “Perhaps this shouldn’t be too surprising, given that the four gaseous planets of the solar system are all different. The hundreds of known exoplanets have forced us to broaden our thinking, and this new data keeps pushing that envelope.”