by Tibi Puiu
in Chemistry, Other
Reading Time: 2 mins read
A A
Share on FacebookShare on TwitterSubmit to Reddit 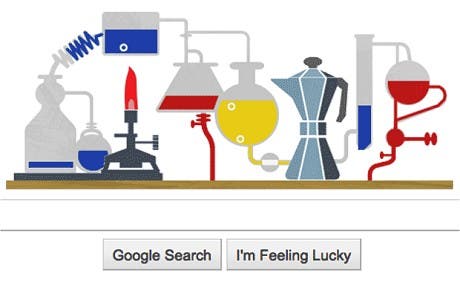 I was very surprised to see today’s Google doodle center piece occupied by an animated Bunsen burner experiment, familiar to anyone with a high school diploma (should be, at least), in the memory of Robert Bunsen, its creator, born 200 years ago. What’s very curious, however, is that the burner, named after Bunsen, was not actually invented by the famous German chemist – it was designed by Peter Desaga, a technician at the University of Heidelburg. Instead, Bunsen improved the burner’s design to aid his endeavors in spectroscopy, according to an article posted on the Woodrow Wilson National Fellowship Foundation Web site.

“Ironically, Bunsen will be remembered by generations of chemistry students for a mere improvement in a burner design, when his other contributions to the field of chemistry are vastly more significant and diverse, covering such areas as organic chemistry, arsenic compounds, gas measurements and analysis, the galvanic battery, elemental spectroscopy and geology,” the article said.

To be more exact, Bunsen, who had earned his doctorate by age 19, is know for his work of investigating emission spectra of heated elements, and the discovery of caesium (in 1860) and rubidium (in 1861) with Gustav Kirchhoff. Bunsen developed several gas-analytical methods, was a pioneer in photochemistry, and did early work in the field of organoarsenic chemistry. He is also the inventor of the Bunsen cell battery.