Pools at the Rio Olympics are turning green

Someone is celebrating St. Patrick's early this year.

by Mihai Andrei
in Chemistry, News
Reading Time: 3 mins read
A A
Share on FacebookShare on TwitterSubmit to Reddit

Tom Daley, the British diver, shared an image on Twitter – one pool at the Rio Olympics had turned green – not a greenish hue, I mean deep green. 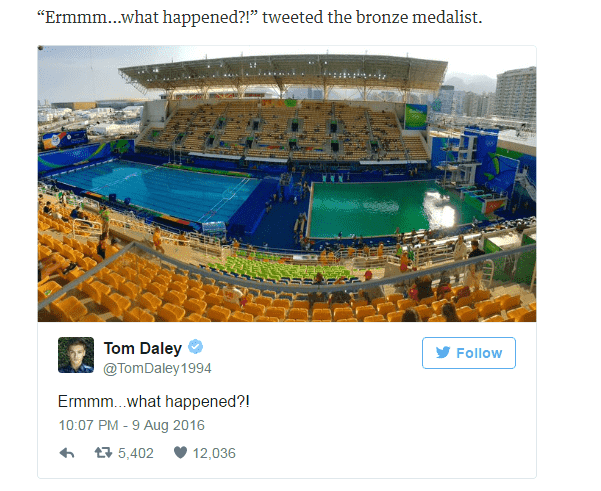 Initially, no one really knew what was happening. There was no apparent explanation and no word from the organizers. The women’s synchronised diving finals took place in the green water, with the event being overshadowed by the mystery. To make things even more bizarre, a second pool has reportedly turned green as well… but why?

The first concern was for the Olympians’ health, but the initial analysis showed there was no reason to worry.

“It’s very important to the Rio 2016 community to ensure a high quality of play,” read the statement. “Tests were conducted and the water was found to be safe. We’re investigating what the cause was.”

However, that still didn’t tell us why it was happening. Media from all around the world started speculating, with most articles suggesting an algae bloom as the major cause. Others believed there was an abundance of urine or phosphate in the water. However, none of those possibilities likely hold up. Algae generally creates a blurry green hue, while the pools were still crystal clear, except green instead of blue. As for urine, there’s no way the necessary quantity gathered in the pool.

The culprit is probably pH. All the Olympic swimming pools are treated with a bunch of chemicals (as are most swimming pools across the world), and if the chemicals run out, then the water’s pH changes, causing the discoloration. A low pH brings out minerals, and for example copper shows up as a blue-green. The hypothesis is also backed by the International Swimming Federation, or FINA, which stated:

FINA can confirm that the reason for the unusual water color observed during the Rio diving competitions is that the water tanks ran out of some of the chemicals used in the water treatment process.

As a result, the pH level of the water was outside the usual range, causing the discoloration. The FINA Sport Medicine Committee conducted tests on the water quality and concluded that there was no risk to the health and safety of the athletes, and no reason for the competition to be affected.

However, this isn’t a common occurrence by any chance. Vox talked to Nate Hernandez, director of aquatic solutions at VivoAquatics. Hernandez says several things would have to break down in order for this to happen. When asked if he would be embarrassed if this happened to him, the response is clear:

However, this is just one thing in the long chain of failures that the Rio Olympics has spurred. Hopefully, there will be no risks for the athletes.